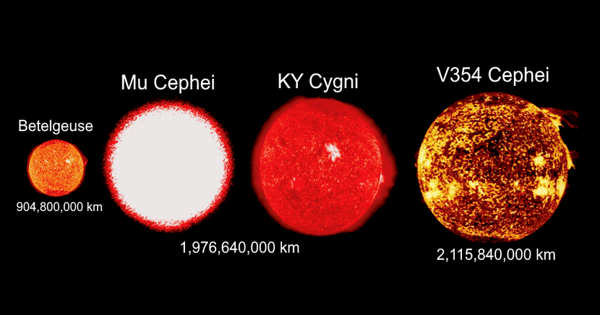 KY Cygni – a Red Star in the Cygnus Constellation

KY Cygni is a red star in the constellation Cygnus. It is a red supergiant with the spectral class M3.5Ia that can be found in the constellation Cygnus. It is one of the largest known stars, with a radius of approximately 1,420–1,503 R (6.60–6.99 au). It is about 5,000 light-years away. If it were placed in the center of the Solar System, it would extend beyond Jupiter’s orbit (or Saturn). It is also one of the most luminous stars, with a luminosity of 300,000 or more times that of the Sun. It is approximately 5,000 light-years away.

Discovered in 1930, this star is not visible from Earth due to emitting a large amount of light in the infrared spectrum and the blocking effect of interstellar dust on the visible component.

KY Cygni is a red supergiant of spectral class M3.5Ia located in the constellation Cygnus. It is one of the largest stars with a radius of about 672 times that of the Sun. It is approximately 3,600 light-years away.

KY Cyg is located close to the bright open cluster NGC 6913, but it is not thought to be a member. The location is close to Cygni, a bright star. In 1930, it was discovered to be a variable star and was given the name KY Cygni. The spectrum was assigned the MK classification of M3 Ia, with only minor changes since then.

KY Cygni has been heavily reddening as a result of interstellar extinction, losing an estimated 7.75 magnitudes at visual wavelengths. If no light was lost, it would be a naked-eye star.

KY Cygni is a luminous red supergiant with a powerful stellar wind. It is described as a cool hypergiant and is losing mass at around 4.9106 M.

Its properties are unknown, but the temperature is approximately 3,500 K. Based on K-band infrared brightness, a model fit yields a luminosity of 273,000 L, corresponding to a radius of 1,420 R. Another model based on visual brightness produces an unexpectedly high luminosity of 1,107,000 L, with the difference being primarily due to assumptions about the level of extinction. The radius associated with the higher luminosity would be 2,850 R.

These parameters are larger and more luminous than expected for a red supergiant, casting doubt on their validity. Integration of the spectral energy distributions across the entire wavelength range from U band to 60-micron microwave flux yields an even lower luminosity of 138,000 L, and calculation of the bolometric luminosity based on its Gaia Data Release 2 parallax yields a luminosity below 70,000 L with a corresponding radius of 672 R.

KY Cygni is a variable star with a large amplitude but no discernible period. It varies rapidly at times and remains fairly constant for long periods of time at others. The photographic magnitude range is 13.5 – 15.5, while the visual magnitude range is 10.60 – 11.74.