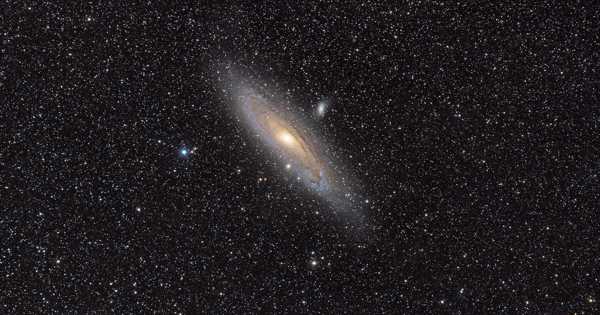 Mayall II is a globular cluster that orbits M31, the Andromeda Galaxy. It is also known as NGC-224-G1, SKHB 1, GSC 2788:2139, HBK 0-1, M31GC J003247+393440, or Andromeda’s Cluster. Globular clusters (GCs) are useful laboratories for studying stellar evolution and dynamics. They are ancient galaxies’ building blocks, and they can help us understand the formation and evolution of their parent galaxies.

It is 130,000 light-years (40 kpc) from the galactic core of the Andromeda Galaxy and is the brightest (by absolute magnitude) globular cluster in the Local Group, with an apparent magnitude of 13.81 in the V band. G1 is the brightest globular cluster in the Local Group of galaxies, located 130,000 light-years from Andromeda’s nucleus. The Local Group is made up of about 20 nearby galaxies, including our own Milky Way.

Mayall II = G1 is one of the most luminous globular clusters (GCs) known in M31. New deep, high-resolution observations with the Advanced Camera for Surveys on the Hubble Space Telescope are used to provide accurate photometric data to the smallest radii yet.

Mayall II is thought to be twice the mass of Omega Centauri and to be home to a central, intermediate-mass (∼ 2×104 M⊙) black hole. It was discovered as a possible globular cluster in 1953 by American astronomers Nicholas Mayall and Olin J. Eggen using a Palomar 48-inch (1.2-meter) Schmidt plate exposed in 1948.

Many argue that it is not a true globular cluster because of the widespread distribution of metallicity, indicating multiple star generations and a long stellar creation period, but rather the galactic core of a dwarf galaxy consumed by Andromeda.

A closer look at the cluster’s finer details reveals fainter helium-burning stars, the temperatures, and brightnesses of which indicate that this Andromeda cluster and the oldest Milky Way clusters are roughly the same age. These clusters were most likely formed shortly after the universe’s birth, providing astronomers with a record of the earliest era of galaxy formation.

Mayall II has a tidal radius of 263.2 light-years as well. Andromeda’s Cluster resembles our galaxy’s clusters but is nearly 100 times farther away. The stellar parameters of the cluster’s stars produce an estimated age of 12 billion years, which is comparable to the age of the Milky Way’s oldest globular clusters. These clusters formed when the universe was still very young, providing insight into a previous era of galaxy formation.

Mayall II, like Omega Centauri in Centaurus, Messier 54 in Sagittarius, and the Intergalactic Wanderer (NGC 2419) in Lynx, is thought to be a stripped core of a dwarf galaxy that lost most of its envelope due to tidal interactions with a larger galaxy (in the case of Mayall II, the Andromeda Galaxy). Mayall II could be home to an intermediate-mass black hole with a mass of about 2×104 solar masses.