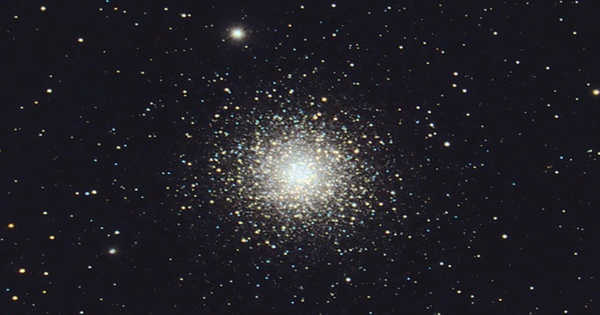 Messier 15 – a Globular Cluster in the Constellation of Pegasus

M15 is a spectacular swarm of stars discovered in 1746 by Jean-Dominique Maraldi, an Italian astronomer looking for comets. This globular cluster is one of the densest ever discovered, with very hot blue stars and cooler orange stars converging on its bright core. M15 is 33,600 light-years away from Earth in the constellation Pegasus. The cluster, which has an apparent magnitude of 6.2, can be seen with binoculars. The best month to see it in October.

M 15 is approximately 33,600 light-years away from Earth and 175 light-years across. It has an absolute magnitude of 9.2, implying a total luminosity of 360,000 times that of the Sun. Messier 15 is one of the Milky Way galaxy’s most densely packed globular clusters. Its core has contracted, a phenomenon is known as “core collapse,” and it has a central density cusp with a massive number of stars surrounding what could be a central black hole.

The cluster, which contains over 100,000 stars, is notable for having a large number of variable stars (112) and pulsars (8), including one double neutron star system, M15-C. Pease 1, the first planetary nebula discovered within a globular cluster in 1928, is also included. Since then, only three more globular clusters have been discovered.