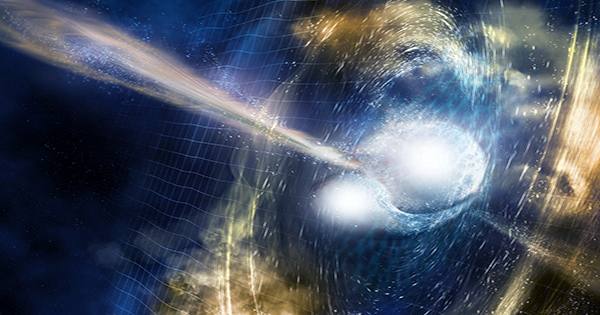 The r-process, a series of nuclear reactions that occur in the most powerful occurrences in the Universe, produces the heaviest elements in the periodic table. This is how gold, platinum, and uranium, as well as half of the atoms heavier than iron, are produced. Collisions between neutron stars, according to a news article, are the primary site of the r-process. An enormous quantity of energy is necessary for the r-process to occur. Some supernovae may accomplish it, but we also have observational evidence of neutron stars colliding and the likelihood of a neutron star colliding with a black hole producing such materials.

The research calculates the rate of production in both scenarios and discovers that binary neutron star collisions are the primary source of heavy metals. The Astrophysical Journal Letters published the findings. In a statement, lead author Hsin-Yu Chen, a postdoc at MIT’s Kavli Institute for Astrophysics and Space Research, stated, “What we find fascinating about our result is that to some level of confidence we can say binary neutron stars are probably more of a goldmine than neutron star-black whole mergers.”

Nuclear fusion powers stars, which begin by fusing hydrogen into helium. When their cores run out of hydrogen, they alter and start fusing helium, which releases less energy and produces heavier elements like carbon and oxygen. When helium is exhausted, heavier stars may begin fusing carbon and oxygen, which releases less energy than helium fusion, and so on until the star has an iron core. You cannot gain energy from fusing iron no matter what you do.

However, did you know that iron is merely the 26th element in the periodic table? How were the remaining elements created? When huge stars run out of fuel, they collapse in on themselves and become supernovae, releasing a large number of heavy elements into the atmosphere. White dwarfs that explode produce more white dwarfs while dying low-mass stars produce even more. However, more energy processes are required for the heavier elements.

The discovery of GW170817, the first-ever detection of neutron stars colliding, provided new insight. Initially, gravitational waves were used to “see” the event, which was later confirmed by electromagnetic telescopes. There were also heavy element signals in the light detected. “The amount of gold produced during the merger was several times the mass of the Earth,” Chen explained. “That completely altered the situation. When compared to supernovae, the calculations indicated that binary neutron stars were a more efficient way to generate heavy metals.”

The research uses simulations to illustrate what the best configuration is for producing heavy elements in the interaction between a neutron star and a black hole. The statistics suggest that it is neither simple nor common. Binary neutron stars produce twice as many heavy elements as a mixed collision in the best-case scenario. However, the research reveals that they may be accountable for up to 100 times more heavy metal than previously thought. Future observations of collisions will strengthen this work, providing better limitations on the types of events and their attributes.