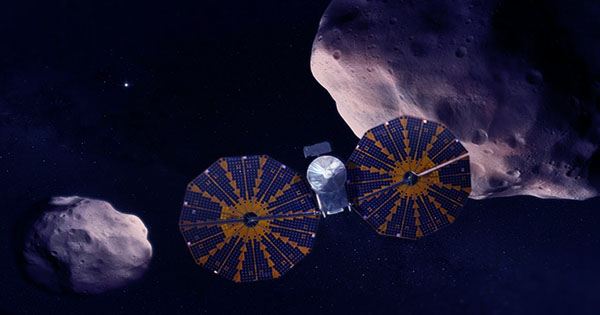 Lucy, NASA’s 12-year mission to examine Jupiter’s Trojan asteroids for the first time, is about to launch. The record-breaking expedition, which will launch on Saturday, will visit eight different asteroids, including one in the main asteroid belt and seven Trojans, making it the first mission to explore eight separate asteroids with differing orbits around the Sun. The Trojans are space pebbles that circle Jupiter, follow, and precede it. Four of these trojans are members of binary systems that offer “two for the price of one,” making their investigation much easier. These asteroids expected to have had fewer collisions with other asteroids than those in the inner Solar System or main asteroid belt, which means they could reveal information about the early Solar System and possibly even the parts from which the planets formed.

“With Lucy, we’ll send a single spacecraft to eight never-before-seen asteroids in 12 years,” stated Tom Statler, Lucy project scientist at NASA Headquarters. “As we explore into the distant history of our Solar System, this is a wonderful chance for discovery.”

The Australopithecus afarensis fossil bones known as “Lucy” inspired the mission’s name. Lucy revolutionized our understanding of early hominins by proving that they were able to walk upright much earlier than previously thought, and she is now regarded an ancestor of all modern hominins, including humans. The Trojan asteroids are also “fossilized relics” of the Solar System’s earliest planetary building pieces.

As the mission progresses, scientists expect to learn wonderful new things about the early years of our little corner of the cosmos. There are several different hypotheses on how the Trojans got their current orbits. If Lucy can answer this question, it will reveal a lot about other parts of the Solar System’s origin, such as the travels that the large planets took to get to their current positions. In April 2025, Lucy will encounter the asteroid 52246 Donaldjohanson (named after Lucy’s discoverer) in the main asteroid belt.

Saturday, October 16th, at 5:34 a.m. EDT, the mission launch window opens. The spacecraft will launch from Space Launch Complex 41 at Cape Canaveral, Florida, aboard a United Launch Alliance (ULA) Atlas V 401 rocket. On the NASA website or via the webcast below, you may witness the launch in real time.