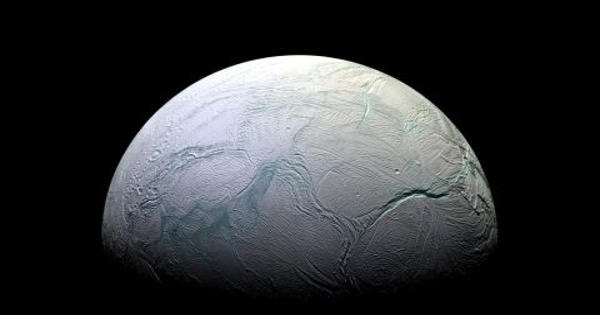 Ocean currents have been predicted to exist and move in the vast subsurface ocean of Saturn’s moon Enceladus. The moon, which is encased in an ice shell 20 kilometers (12.4 miles) thick, is one of the most promising candidates in the ongoing search for extraterrestrial life. The subsurface ocean of Enceladus, one of Saturn’s moons, appears to be churning with Earth-like currents buried beneath 20 kilometers of ice.

The theory, based on the shape of Enceladus’ ice shell, calls into question the current belief that the moon’s global ocean is homogeneous, with the exception of some vertical mixing caused by the warmth of the moon’s core.

Enceladus, Saturn’s sixth largest moon, is a tiny frozen ball about 500 kilometers in diameter (roughly one-seventh the diameter of Earth’s moon). Despite its small size, Enceladus drew scientists’ attention in 2014 when a Cassini spacecraft flyby discovered evidence of a large subsurface ocean and sampled water from geyser-like eruptions that occur through fissures in the ice at the south pole. It is one of the few places in the solar system with liquid water (the other being Jupiter’s moon Europa), making it a target for astrobiologists looking for signs of life.

New research could inform where to one day search for signs of life on Saturn’s moon Enceladus.

Enceladus’ ocean is almost entirely different from Earth’s. Earth’s ocean is relatively shallow (3.6 km deep on average), covers three-quarters of the planet’s surface, is warmer at the surface from the sun’s rays and colder in the depths near the seafloor, and has wind-influenced currents; Enceladus, on the other hand, appears to have a globe-spanning and completely subsurface ocean that is at least 30 km deep and is cooled at the top near the ice shell.

Despite their differences, Caltech graduate student Ana Lobo (MS ’17) believes Enceladus’ oceans have currents similar to those on Earth. The research builds on Cassini’s measurements as well as the work of Andrew Thompson, professor of environmental science and engineering, who has been studying how ice and water interact to drive ocean mixing around Antarctica.

The oceans of Enceladus and Earth have one thing in common: they are both salty. And, as evidenced by findings published in Nature Geoscience on March 25, variations in salinity could drive ocean circulation on Enceladus in the same way that they do in Earth’s the Southern Ocean, which surrounds Antarctica.

Lobo and Thompson worked on the project with JPL’s Steven Vance and Saikiran Tharimena, which Caltech manages for NASA. NASA’s now-retired Cassini spacecraft was tasked with discovering the secrets of Saturn’s system over the course of its 13-year mission. During this time, the tiny, icy moon of Enceladus captured the attention of both scientists and the general public.

Cassini’s gravity measurements and heat calculations had previously revealed that the ice shell is thinner at the poles than at the equator. Thompson believes that regions of thin ice at the poles are associated with melting and regions of thick ice at the equator with freezing. This has an impact on ocean currents because when salty water freezes, the salts are released, making the surrounding water heavier and causing it to sink. In melt regions, the opposite occurs.

“Knowing the distribution of ice allows us to constrain circulation patterns,” says Lobo. Based on Thompson’s studies of Antarctica, an idealized computer model suggests that the regions of freezing and melting, identified by the ice structure, would be linked by ocean currents. This would result in a pole-to-equator circulation, which would influence heat and nutrient distribution.

“Knowing which regions of the subsurface ocean are most hospitable to life as we know it could one day inform efforts to search for signs of life,” Thompson says.

The addition of such water movement, in addition to the core-heating-caused mixing proposed in previous studies, paints a more complex picture of the dynamics occurring in Enceladus’ oceans. Furthermore, the pole-to-equator circulating current may influence the global distribution of heat and nutrients, which may aid astrobiologists in determining which parts of the subsurface ocean may be suitable for life.