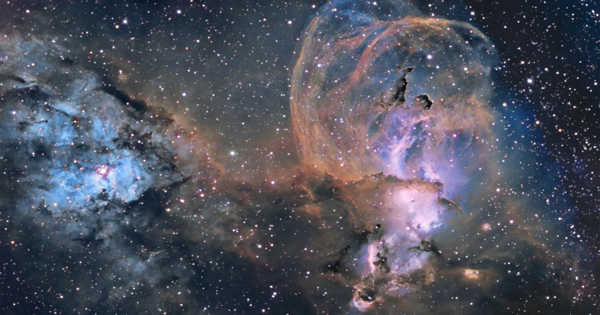 NGC 3603-B, also known as HD 97950B, is a Wolf-Rayet star in the NGC 3603 star-forming region, located at the center of the HD 97950 cluster. It is approximately 20,000 light-years away from Earth. It has the spectral type WN6h and is one of the brightest and most massive stars known. WN6 indicates that there are strong ionized nitrogen lines in comparison to ionized carbon lines. NGC 3603 has a mass 132 times that of the Sun. It has a brightness of 2,900,000. Although the star is only 1.5 million years old, it has lost a significant portion of its initial mass.

HD 97950 was classified as a star, but it was later discovered to be a dense cluster or close multiple stars. The six brightest members were assigned letters ranging from A to F in 1926, though several of them have since been resolved into more than one star. Star B was discovered to be the brightest single star.

HD 97950B is a Wolf-Rayet (WR) star with strongly broadened emission lines dominating its spectra. The suffix h indicates that hydrogen is also present in the spectrum, and type WN6 indicates that ionized nitrogen lines are stronger than ionized carbon lines.

This type of WR star is not the classic stripped helium-burning aged star, but a young highly luminous object with CNO cycle fusion products visible at the surface as a result of strong conventional and rotational mixing, as well as high mass-loss rates from the atmosphere. The emission lines are produced by the stellar wind, and the photosphere is completely obscured. The surface fraction of hydrogen is still thought to be around 60%.

HD 97950B is the most massive and luminous star known in the NGC 3603 region, nearly three million times brighter and 132 times more massive than the sun. Although the star is only 1.5 million years old, it has already lost a significant portion of its initial mass. The initial mass was estimated to be 166 M☉, implying a loss of 34 M☉.

NGC 3603 is the Milky Way’s most massive visible cloud of glowing gas and plasma, known as a H II region. The central star cluster contains the galaxy’s densest concentration of very massive stars. Strong ultraviolet radiation and stellar winds have cleared the gas and dust, revealing the cluster in its entirety.