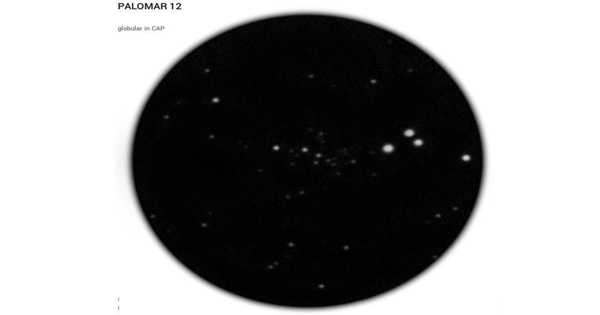 Palomar 12 – a Globular Cluster in the Constellation Capricornus

Palomar 12 is a globular cluster in the Capricorn constellation. It is located approximately 62,000 light-years away in the constellation Capricornus. Palomar 12 was not born here, despite its current location on the outskirts of the Milky Way’s halo.

It was classified as a globular cluster after being discovered on the National Geographic Society – Palomar Observatory Sky Survey plates by Robert George Harrington and Fritz Zwicky. Zwicky, on the other hand, came to believe that this was a nearby dwarf galaxy in the Local Group. It is a young cluster, about 30% younger than the majority of the Milky Way’s globular clusters. It is metal-rich, with a metallicity of [Fe/H] ≈ -0.8. It has a Mv = -4.48 average luminosity distribution.

When astronomers first discovered this object, they were perplexed by its unusually young age in comparison to other clusters in the galaxy. It appeared to be about 30% younger than other globular clusters in the Milky Way.

Another study discovered that Palomar 12 was ripped from its original home, the Sagittarius Dwarf Elliptical galaxy, around 1.7 billion years ago as a result of tidal interactions between its former home and our galaxy. The dwarf galaxy Palomar 12 once called home is a satellite galaxy located about 70,000 light-years away that orbits us closely – even passing through the plane of our galaxy on occasion.

Globular clusters are densely packed spherical agglomerations of stars that are thought to be some of the Universe’s oldest objects. The ‘Globulars,’ as they are sometimes referred to, are both beautiful and enigmatic star clusters that can make you stop and think about the history and future of the universe. Globular clusters appear to be found in the haloes of most large galaxies, with the number increasing with galaxy size. The giant elliptical galaxy M87, for example, may have more than 10,000 globulars, compared to the Milky Way’s 160 or so. According to some sources, there may be a few more yet to be discovered in our own Galaxy.

Based on proper motion studies, this cluster was first suspected in 2000 to have been captured about 1.7 Ga ago from the Sagittarius Dwarf Elliptical Galaxy (SagDEG). It is now widely assumed to have originated in that galaxy and is linked to the Sagittarius Stream. It is thought to be 6.5 Gyr old.

For astronomers, globular clusters look great through any lens and become more impressive as the aperture of the telescope increases. Individual stars within globular clusters are quite faint as seen from Earth, so star color is difficult to discern through the eyepiece. Images of globular clusters, on the other hand, frequently show more reddish stars than blue stars. This hints at their great age: often more than 10 billion years.