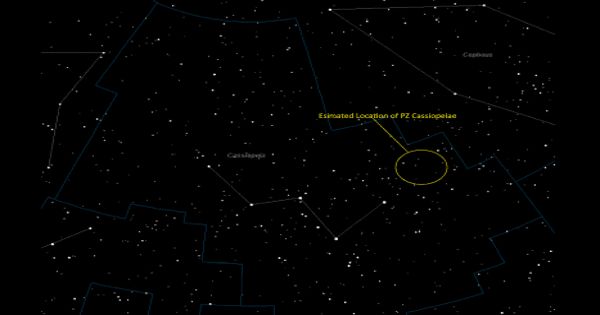 PZ Cassiopeiae is one of the largest stars discovered to date. It is a luminous red supergiant star, one of the largest known stars with a radius more than 1,000 times that of the Sun (R), and also one of the most luminous of its type, approximately 200,000 times more luminous than the Sun (L). It is estimated to be between 1,260 and 1,340 times the size of the Sun. It appears to be a member of the Cas OB5 stellar association, though it is much younger than the other stars in the association. At around 2.6105 M, the star is losing mass and was previously classified as a hypergiant.

PZ Cassiopeiae has an apparent magnitude of 8.22, which is a measurement of the star’s brightness as seen from Earth. The distance between it and Earth was initially estimated to be around 7,800 light-years (2.4 kiloparsecs). Subsequent studies of the star using the water masers that surround it have allowed for the refinement of both the distance and the parameters of this star, yielding an accurate parallax of 0.3560.026 mas, corresponding to a distance of 9,160 light-years (2.81 kiloparsecs), a luminosity of around 229,000 L, and an initial mass of 20 to 25 times that of the Sun. All of these parameters are comparable to those estimated for the red hypergiant VY Canis Majoris.

Supergiant luminosity classes are simple to calculate and apply to a large number of stars, but the group a variety of stars into a single category. A less reliable Gaia Data Release 2 parallax of 0.420.09 mas gives the star a luminosity of less than 180,000 L and a radius of 1,062 R. It also hosts the red supergiant PZ Cassiopeiae, which is one of the largest known stars and is also a semiregular variable.

PZ Cas is a slow semi-regular variable star with a period of 925 days listed in the General Catalogue of Variable Stars, though periods of 850 and 3,195 days have been calculated. The visual range is approximate magnitude 8-10, large for this type of variable.