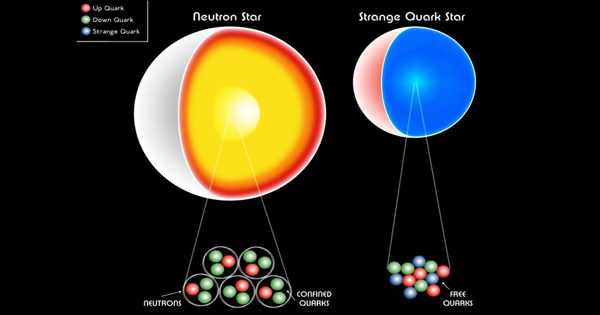 A quark star is a hypothetical celestial object with a density somewhere between that of a neutron star and that of a black hole, formed by the collapse of a massive neutron star with enough gravitational pressure to reduce all constituent particles to strange quarks.

A quark is a type of elementary subatomic particle; three of them combine to form a proton or neutron. Some scientists believe quark stars (which are made of quarks rather than complete protons or neutrons) exist, based on a famous conjecture by eminent Princeton physicist Ed Witten.

A quark star can have a diameter of fewer than 11 kilometers. Quark stars, like neutron stars, are made up of neutrons that have been subjected to enough pressure during the star’s collapse to lose their differentiation and dissolve into a mass of quarks and gluons. The up and down quarks that make up neutrons then change into strange quarks, resulting in a strange matter that is even denser than a neutron star.

Quark-star is a hypothetical celestial object that is intermediate in density between a neutron star and a black hole, possibly the remnant of a massive neutron star with all particles reduced to strange quarks.

When the neutron-degenerate matter that makes up neutron stars is subjected to enough pressure, either from the star’s own gravity or from the initial supernova that created it, the individual neutrons break down into their constituent quarks (up quarks and down quarks), forming what is known as quark matter. Depending on the physical conditions, this conversion could be limited to the neutron star’s core or it could transform the entire star. A star like this is known as a quark star.

At the end of their lives, some massive stars collapse to form neutron stars, as has been observed and theoretically explained. Under the extreme temperatures and pressures found inside neutron stars, neutrons are normally kept apart by a degeneracy pressure, which helps to stabilize the star and prevent further gravitational collapse. A new equilibrium is expected to emerge in this state, as a new degeneracy pressure between the quarks, as well as repulsive electromagnetic forces, will occur and prevent gravitational collapse.

If these theories are correct, quark stars could exist and be observed somewhere in the universe. Theoretically, such a scenario is considered scientifically plausible, but it has proven impossible to prove both observationally and experimentally because the very extreme conditions required for stabilizing quark matter cannot be created in any laboratory or directly observed in nature. For these reasons, the stability of quark matter, and thus the existence of quark stars, is one of physics’ unsolved problems.

If quark stars can form, then the most likely place to find quark star matter is inside neutron stars that have an internal pressure that exceeds the internal pressure required for quark degeneracy – the point at which neutrons break down into a form of dense quark matter. They could also form if a massive star collapses at the end of its life, assuming the star is large enough to implode beyond a neutron star but not large enough to form a black hole.