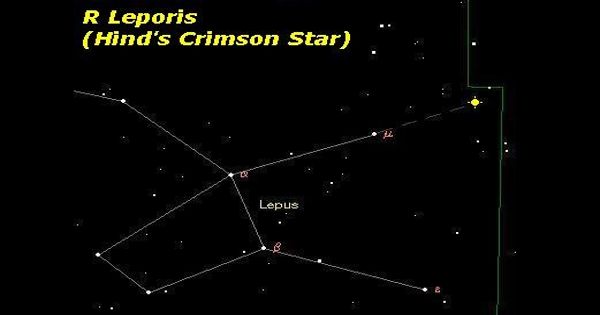 R Leporis is a long-period variable in the constellation Lepus, easily seen in binoculars when at maximum brightness. It is also known as R Lepus and Hind’s Crimson Star (named after astronomer James Hind), which is a red giant star in the Lepus constellation. It is a Carbon Star type star. It is a well-known variable star in the constellation Lepus, near its border with Eridanus. It is mostly made up of carbon and is between 400 to 535 times larger than the Sun. This star is losing its carbon-rich atmosphere into the surrounding interstellar material through a strong stellar wind though and could be near the transition to a planetary nebula.

R Leporis is the reddest reasonably bright star in the sky. It is mostly made up of carbon and is between 400 to 535 times larger than the Sun.

It is a carbon star that appears distinctly red. It is named after famous British astronomer J. R. Hind, who observed it in 1845. Located 1,360 light-years away in the constellation Lepus the star is a Mira-type variable, changing its brightness over a period of about 14 months. Its apparent magnitude varies from +5.5 to +11.7 with a period of 418–441 days; recent measurements give a period of 427.07 days. There may be a secondary period of 40 years. The star can not be seen by the naked eye, you need a telescope to see it.

R Leporis is too far from earth for its parallax to be measured effectively; Guandalini and Cristallo calculated the luminosity of Mira variables based on their periods. Lepus is in the south as night falls, below Rigel, the bright blue-white star that marks the foot of Orion the hunter. Using a period of 427.07 days, they calculated the bolometric luminosity to be 13,200 L☉. It was estimated to around 1,350 light-years distant in a 2012 paper, shining with a luminosity approximately 6,689 times that of the Sun and has a surface temperature of 2,980 K. These carbon stars contain more carbon than oxygen and also have a low temperature so the carbon atoms can exist as molecules such as carbon monoxide and even methane.

R Leporis has often been reported as an intense smoky red color, although this is not pronounced when the star is near its maximum brightness. It is now recognized as a carbon star, a very cool and highly evolved red giant with an extreme abundance of carbon. It is reddest when it is dimmest, which occurs every 14.5 months. Extra carbon in carbon stars is created by helium fusion near the dying stellar core and dredged up into the stars’ outer layers.