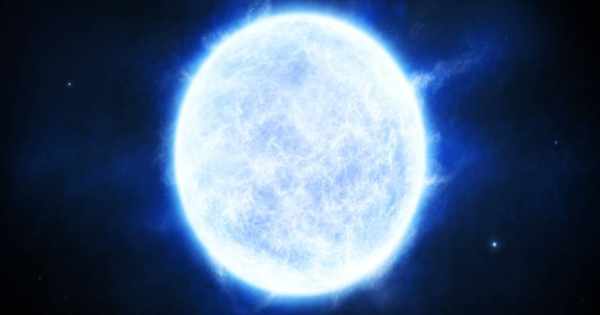 R136a1 is the most massive and luminous star ever discovered. It is a rare type of massive star with prominent ionized helium and carbon or nitrogen signs. While stars like the sun are primarily composed of hydrogen and helium, Wolf-Rayet stars contain significant amounts of other heavy elements. R136’s central star is a Wolf–Rayet star.

Ri36 is the central group of stars in the Tarantula nebula’s large NGC 2070 open cluster. The nebula is located approximately 50 kiloparsecs (163,000 light-years) away in the Large Magellanic Cloud. At magnitude 7.25, the cluster can be seen with binoculars or a small telescope in the far southern celestial hemisphere. R136a1 itself is 10,000 times fainter and can only be resolved using speckle interferometry.

R136a1, hundreds of times the mass of our sun and millions of times brighter, was spotted in a star-making nebula some 22,000 light-years away.

R136a1 has 265 times the mass of the Sun and 8.7 million times the luminosity of the Sun. It is also one of the hottest, with a temperature of over 50,000 K. The cluster is only about 1.5 million years old and emits a tremendous amount of energy. They outshine the Sun by a factor of 30 million.

A group of astronomers at Pretoria’s Radcliffe Observatory conducted systematic measurements of the brightness and spectra of bright stars in the Large Magellanic Cloud in 1960. Subsequent observations revealed that R136 was in the middle of a massive region of ionized interstellar hydrogen known as an H II region, which was a hotspot of intense star formation in the vicinity of the observed stars.

The Hubble Space Telescope’s launch provided the final confirmation of R136a’s nature. Its Wide Field and Planetary Camera (WFPC) separated R136a into at least 12 components and revealed that R136 contained over 200 bright stars. The more advanced WFPC2 allowed researchers to study 46 massive luminous stars within half a parsec of R136a and over 3,000 stars within a 4.7 parsec radius.

R136 is visible in the night sky as a 10th magnitude object at the core of the NGC 2070 cluster, which is embedded in the Tarantula Nebula in the Large Magellanic Cloud. In 1979, a 3.6-meter telescope was needed to detect R136a as a component of R136, and resolving R136a in order to detect R136a1 requires a space telescope or sophisticated techniques such as adaptive optics or speckle interferometry.

The LMC is circumpolar south of about the 20th parallel south, which means that it can be seen (at least in part) all night every night of the year, weather and light pollution permitting. It is visible in the Northern Hemisphere south of the 20th parallel north. North America (except for southern Mexico), Europe, northern Africa, and northern Asia are all excluded.

The star is the largest of the cluster’s nine massive stars. Massive stars are also the source of neutron stars. When a Wolf-Rayet star explodes, it can leave a dense neutron star core behind. Gravitational waves are thought to be produced by neutron star collisions.