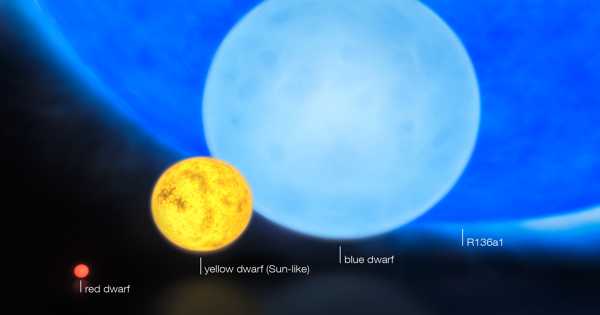 R136c is a Wolf–Rayet star with a WN5h spectral type. WN5 denotes ionized helium emissions, which are stronger than neutral helium lines. It is the second most massive star in the R136 star-forming region and is located in the Tarantula Nebula. The temperature is 51,000 degrees Celsius.

The CNO process is responsible for extreme luminosity. It has 230 times the mass of the Sun and is 5,623,000 times brighter. The star’s mass is being eroded by stellar winds. Due to the hard x-ray emission of colliding wind binaries, it is strongly suspected to be a binary system. However, the companion only contributes a small portion of the luminosity.

R136c will most likely end in a supernova, hypernova, or gamma-ray burst, or with no visible explosion and become a black hole. The fate of R136c is determined by its mass loss. R136c’s future is uncertain. It may become or simply skip the LBV stage, becoming a hydrogen-free (WNE or WNL) star. Finally, a wolf-rayed star will be fusing oxygen (WO). Then, most likely, it will explode in a supernova. Its relic would most likely be a black hole.

It is a very young, very bright object. R136c can be seen from the R136 cluster’s lower left to the center. The Radcliffe Observatory in Pretoria discovered it in 1996, though R136 a and b were discovered earlier.

R136c is so energetic that it has already lost a significant portion of its initial mass despite being only a few million years old. It is still on the main sequence, fusing hydrogen at its core via the CNO cycle, but it has convected and mixed fusion products to the surface, resulting in powerful stellar wind and emission spectrum seen only in highly evolved stars.

Its fate is determined by the amount of mass it loses before its core collapses, but it is most likely to explode as a supernova. The most recent models for single star evolution at near-solar metallicities suggest that the most massive stars explode as highly stripped type Ic supernovae, though binaries can have different outcomes. Some of these supernovae are expected to produce gamma-ray bursts, with a black hole as the expected remnant.