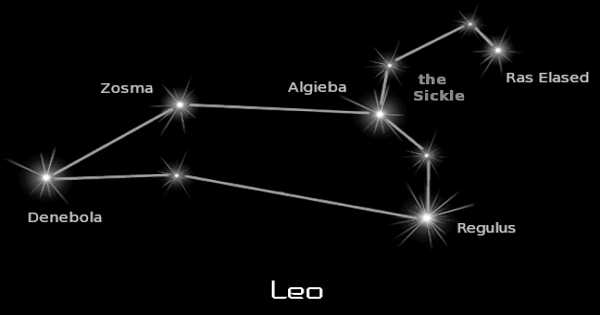 Regulus – a Brightest Star in the Leo Constellation

The brightest star in the Leo constellation is Regulus, also known as Alpha Leonis. It is the brightest object in the constellation Leo, as well as one of the brightest stars in the night sky, and it is located approximately 79 light-years from the Sun. It is a 3.5-times-larger-than-the-Sun blue main-sequence star. Regulus appears to be a single star, but it is actually a quadruple star system made up of four stars organized into two pairs.

Regulus A is a spectroscopic binary consisting of a blue-white main-sequence star and its companion, which has not yet been directly observed but is most likely a white dwarf. In March and April, it rises higher in the sky with each passing day as winter favorites like Orion the Hunter descend westward. By May, this brilliant blue-white star is easily visible in the evening sky as soon as the sun sets.

HD 87884 is a close pair separated by 176′′ from Regulus. Regulus, along with five slightly fainter stars (Zeta Leonis, Mu Leonis, Gamma Leonis, Epsilon Leonis, and Eta Leonis), has been dubbed ‘the Sickle,’ an asterism that marks the head of Leo.

Regulus A dominates the light output. If seen alone, Regulus B would be a binocular object of magnitude +8.1, and its companion, Regulus C, the faintest of the three stars directly observed, would require a large telescope to see, at magnitude +13.5. Regulus A is a spectroscopic binary; the secondary star has yet to be observed directly because it is much fainter than the primary. The BC pair is visible in amateur telescopes because it is 177 arc-seconds away from Regulus A.

Regulus is a multi-star system with at least four stars. The dominant star is Regulus A, which has a binary companion 177 “a distance thought to be physically related At 212, Regulus D is a companion of 12th magnitude “, but it’s a completely unrelated background object.

Regulus A is a binary star composed of a blue-white subgiant star of spectral type B8 orbited by a star of at least 0.3 solar masses, most likely a white dwarf. It takes the two stars about 40 days to complete an orbit around their common center of mass. Given the primary’s extremely distorted shape, the relative orbital motion may be significantly altered in comparison to the two-body purely Keplerian scenario due to non-negligible long-term orbital perturbations affecting, for example, its orbital period. In other words, Kepler’s third law, which holds precisely only for two point-like masses, would no longer be applicable to the Regulus system.

Regulus A was thought to be relatively young, only 50 – 100 million years old, based on comparisons of its temperature, luminosity, and mass. The presence of a white dwarf companion implies that the system is at least 1 billion years old, just to account for the formation of the white dwarf.