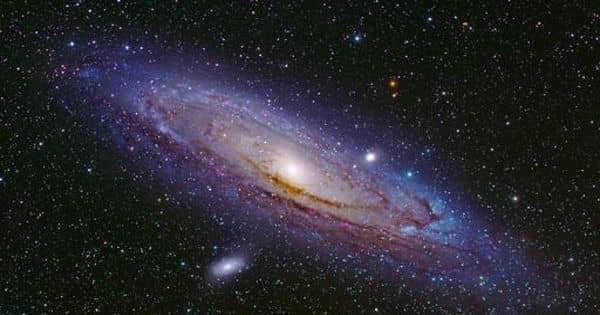 A massive cluster of stars of intermediate age has been discovered in the direction of the Scutum constellation by researchers. This object, known as Valparaso 1, is approximately seven thousand light years from the Sun and contains at least fifteen thousand stars.

An international team of astrophysicists led by the Stellar Astrophysics Group of the University of Alicante (UA), the Instituto de Astrofsica de Canarias (IAC), and the University of Valparaiso (Chile) discovered a massive cluster of intermediate-age stars in the direction of the Scutum constellation. This object, known as Valparaso 1, is approximately seven thousand light years from the Sun and contains at least fifteen thousand stars.

Observations from the ESA’s Gaia satellite and various ground-based telescopes, including the Isaac Newton Telescope at the Roque de los Muchachos Observatory (Garafa, La Palma, Canary Islands), were combined to detect it. The result has been published in Monthly Notices of the Royal Astronomical Society (MNRAS).

Researchers have discovered a massive cluster of stars of intermediate age in the direction of the Scutum constellation. This object, which has been named Valparaíso 1, lies some seven thousand light-years away from the Sun and contains at least fifteen thousand stars.

Open clusters are groups of stars that were born together and continue to move together as a result of gravity. As a result, they are ideal laboratories for studying the physics and lives of stars. The more stars in a cluster, the more useful it is, because a larger sample gives a better chance of finding stars in less common evolutionary phases.

This is why astronomers are looking for the most massive star clusters in our Galaxy, those with more than ten thousand stars. Until twenty years ago, it was thought that these only formed in distant galaxies with exotic properties, but thanks to these searches, we now know of a dozen very young massive clusters (less than 25 million years old), as well as a few very old ones (thousands of millions of years old), which are descendants of former young clusters. However, there are few known massive clusters with intermediate ages, and it was unclear whether these did not exist or had yet to be discovered.

The newly discovered cluster, dubbed Valparaso 1, is located approximately seven thousand light-years from the sun and contains at least fifteen thousand stars. Its unexpected discovery in a well-explored part of the sky suggests that many other massive clusters may be hidden in the extremely dense star fields seen when looking towards the center of our Galaxy.

“Valparaso 1 contains dozens of stars bright enough to be seen with an amateur telescope, but they are lost in the middle of a crowd of stars that don’t belong to the cluster, but are in front of or behind it, and which disguise the structure of the cluster,” explains Ignacio Negueruela, a researcher at the University of Alicante and the article’s first author.

“Previous searches attempted to locate open clusters, but Valparaiso 1 does not look like a cluster similar to those we usually find, which is why it was not discovered previously,” says Ricardo Dorda, an IAC researcher and co-author of the article.

The cluster was discovered thanks to the European Space Agency’s (ESA) Gaia satellite, a space telescope that provides extremely accurate positions and distances of stars from a great distance away, allowing us to measure the stars’ tiny motions across the sky over time. Using all of the information, we can detect clusters as groups of stars that are the same distance from us and move together, groups of stars that are easier to detect using physics than simply looking at them in the sky.

After locating the cluster, the researchers used telescopes at Chile’s Las Campanas Observatory and the Isaac Newton Telescope (INT) at the Roque de Los Muchachos Observatory (Garafa, La Palma, Canary Islands) to determine the physical properties of its stars.