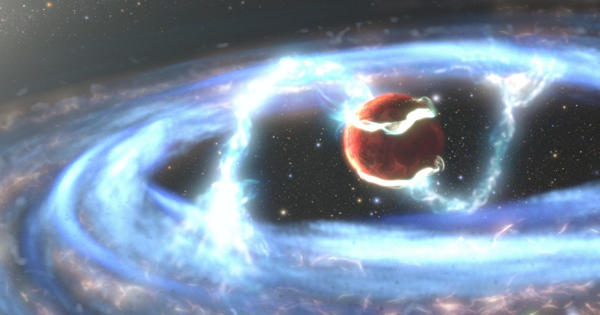 Have you ever made complete shambles in your kitchen while baking? It may appear that flour is floating in the air at times, but once you’ve added enough water and formed your dough, the bread will resemble a ball. A similar process is taking place in the far-flung solar system known as PDS 70, except that the flour and water have been replaced by gas and dust. In the case of planet PDS 70b, gas and dust are slowly drawn in over millions of years as this distant world builds mass.

Hubble’s unique ultraviolet sensitivities were used to capture radiation from extremely hot gas falling onto the planet, allowing researchers to directly measure the mass growth rate of PDS 70b for the first time. The massive, Jupiter-sized world orbits the Sun at roughly the same distance as Uranus, though it must navigate a tangle of gas and dust as it moves through the solar system. The planet, which began to form about 5 million years ago, may be nearing the end of its formation process.

The findings of the researchers open up a new way to study forming planets, which could help other astronomers learn more about how giant planets form in distant solar systems.

NASA’s Hubble Space Telescope is providing astronomers with a rare look at a Jupiter-sized planet that is still forming and feeding off material surrounding a young star. “We just don’t know a lot about how giant planets grow,” Brendan Bowler of the University of Texas at Austin said. “This planetary system provides us with our first glimpse of material falling onto a planet. Our findings open up a new avenue of investigation for this research.”

Researchers using Hubble directly measured the mass growth rate of PDS 70b for the first time by using the observatory’s unique ultraviolet sensitivities to capture radiation from extremely hot gas falling onto the planet.

Despite the fact that over 4,000 exoplanets have been cataloged to date, only about 15 have been directly imaged by telescopes. And the planets are so far away and small that even the best photos only show them as dots. The team’s novel method for directly imaging this planet with Hubble opens up new avenues for future exoplanet research, particularly during a planet’s formative years.

This massive exoplanet, known as PDS 70b, orbits the orange dwarf star PDS 70, which already has two actively forming planets inside a massive disk of dust and gas that encircles the star. The system is located in the constellation Centaurus, 370 light-years from Earth.

“This system is so exciting because we can see the formation of a planet,” said Yifan Zhou, another University of Texas at Austin researcher. “This is the youngest genuine planet Hubble has ever imaged directly.” At only 5 million years old, the planet is still accumulating material and mass.

The ultraviolet light (UV) sensitivity of Hubble provides a unique perspective on radiation from extremely hot gas falling onto the planet. “Hubble’s observations enabled us to estimate how quickly the planet is gaining mass,” Zhou added.

The UV observations, which add to the body of knowledge about this planet, enabled the team to measure the planet’s mass growth rate directly for the first time. Over the course of about 5 million years, the remote world has grown to be five times the mass of Jupiter. The current measured accretion rate has dwindled to the point where the planet would only increase by about 1/100th of a Jupiter mass if the rate remained constant for another million years.

Zhou and Bowler emphasize that these observations are only a snapshot in time; more data is needed to determine whether the rate at which the planet is adding mass is increasing or decreasing. “Our measurements suggest that the planet is nearing the end of its formation process,” they say.

The young PDS 70 system is filled with a primordial gas-and-dust disk that serves as fuel for the formation of planets throughout the system. PDS 70b is surrounded by its own gas-and-dust disk, which is sucking material from the vastly larger circumstellar disk.

These findings shed light on how gas giant planets formed 4.6 billion years ago around our sun. Jupiter may have grown in size as a result of an infalling disk of material. Its major moons would have formed from the disk’s leftovers as well.

Overcoming the glare of the parent star was a challenge for the team. PDS 70b orbits the Sun at approximately the same distance as Uranus, but its star is more than 3,000 times brighter at UV wavelengths. Zhou carefully removed the star’s glare from the images, leaving only the light emitted by the planet. He increased the limit of how close a planet can be to its star in Hubble observations by a factor of five.

“We’re still finding new ways to use Hubble 31 years after it was launched,” Bowler added. “Yifan’s observation strategy and post-processing technique will open up new avenues for studying similar systems, or even the same system, with Hubble over and over again. With future observations, we may be able to determine when the majority of the gas and dust falls onto their planets and whether this occurs at a constant rate.”