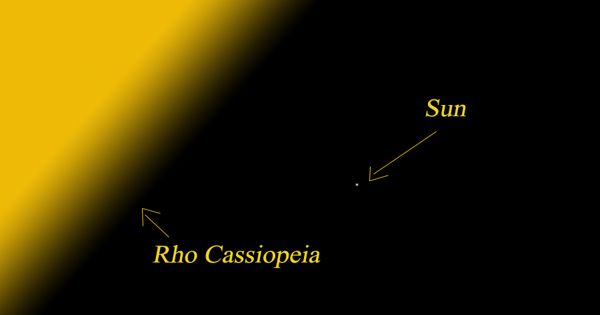 Rho Cassiopeiae is a yellow hypergiant star, the brightest one in the night sky. It belongs to an unusual class of stars called hypergiants, which are much brighter and many times more massive than Sol. It is about 3,400 light-years from Earth, yet can still be seen by the naked eye as it is over 300,000 times brighter than the Sun. Despite being located some 10,000 light-years (ly) away, the star is visible to the naked eye because it is over 500,000 times more luminous than Sol.

Rho Cassiopeiae is also one of the only seven currently known yellow hypergiants in the Milky Way. It is located in the constellation Cassiopeia. Its diameter measures between 400 and 500 times that of the Sun, approximately 627,000,000 kilometers, or about twice the size of the Earth’s orbit. It is variable and fluctuates around magnitude 5 but dimmed to 6th magnitude in 1946. It is also one of the largest, with a size 450 times larger than the Sun. If it took the Sun’s place in our own solar system, it would extend past the orbit of Mars.

Rho Cassiopeiae is an F-type hypergiant and one of the most luminous known stars in the Galaxy. The heaviest stars in the universe eventually blast themselves to bits.

Rho Cassiopeiae is a single star and is categorized as a semiregular variable. Its visual magnitude is 4.54. As a yellow hypergiant, it is one of the rarest types of stars. Because of its moderate brightness, ρ Cassiopeiae should be easily visible from locations with dark skyes, while it can be barely visible, or not visible at all, from skyes affected by light pollution. Only a few dozen are known in the Milky Way, but it is not the only one in its constellation which also contains V509 Cassiopeiae.

Rho Cassiopeiae is one of the most luminous yellow stars known. Like all extremely massive stars, however, hypergiants are very short-lived with a total life of only a few million years. It is close to the Eddington luminosity limit and normally loses mass at around 10-6 M☉/yr, hundreds of millions of times the rate of the solar wind. With surface temperatures between 3,500 and 7,000 °K, yellow hypergiants appear to be stars that are at a very evolved stage of their life and maybe close to exploding as supernovae.

Its last eruption happened in 2000-2001, during which the star ejected about 10 percent of a solar mass, dimmed by more than a full magnitude, and changed its spectral type from late F to early M. Much of the time it has a temperature over 7,000 K, a radius around 400 R☉, and pulsates irregularly producing small changes in brightness. More of these eruptions are probably in the star’s future. And eventually, it’ll blow itself apart as a supernova. Its outer layers will blast into space, while its core will be crushed — forming either a super-dense neutron star or an even denser black hole.