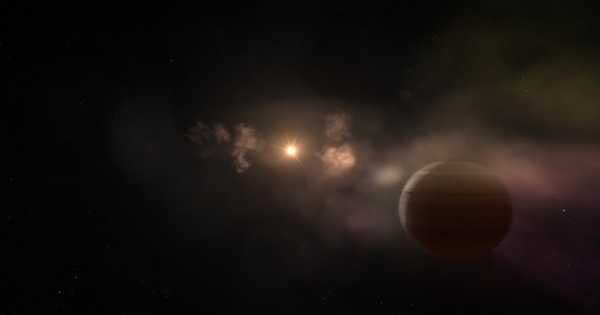 RZ Piscium (or RZ Psc) is a variable star of the UX Orionis type located 550 light-years (170 pc) away in the constellation Pisces. One of the most unusual members of the UX Ori star family is RZ Psc. The star has been observed to brighten and dim erratically over time, dimming by as much as a tenth of its normal luminosity. RZ Piscium has been discovered to emit a large amount of infrared radiation, implying the presence of a significant mass of gas and dust orbiting the star, possibly from a “disrupted planet.”

Astronomers studying RZ Piscium, a variable Sun-like star, discovered evidence that its strange, unpredictable dimming episodes could be caused by orbiting clouds of gas and dust, the remnants of one or more destroyed exoplanets.

The XMM-Newton satellite, the Shane 3-meter telescope at Lick Observatory in California, and the 10-meter Keck I telescope at W. M. Keck Observatory in Hawaii were used to study RZ Piscium in 2017. The temperature of the star was discovered to be approximately the same as that of the Sun (5,600 K (5,330 °C)). Furthermore, the star was discovered to emit a thousand times more x-rays than the Sun, indicating that it is young.

RZ Piscium, on the other hand, was discovered to have a relatively small amount of surface lithium, implying that the star is between 30 and 50 million years old; this is somewhat “old” for a star with so much circumstellar dust. Most dusty young stars like RZ Piscium may be producing planets, but given its advanced age, RZ Piscium may be destroying and consuming its planets instead.

The surface temperature of the star was discovered to be around 9,600 degrees Fahrenheit (5,330 degrees Celsius), only slightly cooler than the Sun’s. They also show that the star is enriched in lithium, which is slowly destroyed by nuclear reactions inside stars.

In 2020, a red dwarf companion with a mass of 0.12 solar mass was discovered at a projected distance of 23 AU from the primary star. The companion star’s incandescence thus accounts for roughly one-third of the excess infrared emission previously attributed to dust.

According to the astronomers, it is possible that the star’s gravitational tides are removing material from a nearby substellar companion or giant planet, resulting in intermittent streams of gas and dust, or that the companion has already been completely dissolved. Another possibility is that one or more massive gas-rich planets in the system collided catastrophically in the recent past.