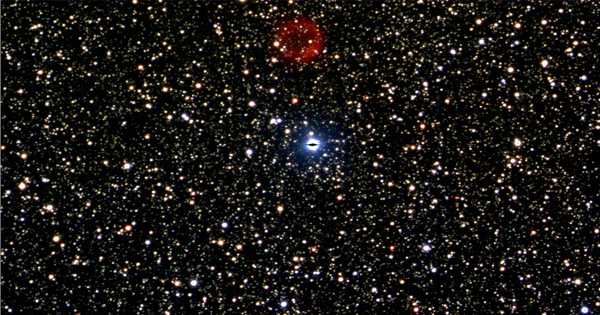 Sakuri’s Object – a Star in the Sagittarius Constellation

Sakuri’s Object, also known as V4334 Sagittarii, is a star in the constellation Sagittarius. It is a star in the Sagittarius constellation. It is thought to have been a white dwarf that swelled and became a red giant as a result of a very late thermal pulse. It’s in the center of a planetary nebula and is thought to be in thermal instability and the final shell helium flash phase right now.

It is thought that a white dwarf grew to become a red giant. It’s in the middle of a planetary nebula. Sakurai’s Object and other stars like it are expected to become helium-rich white dwarfs. They go through a “born-again” giant phase back to the white dwarf cooling track.

Sakuri’s Object was discovered in 1996. At the time of its discovery, astronomers believed Sakurai’s Object to be a slow nova. Later spectroscopic analysis suggested that the star was not a nova, but had instead undergone a very late thermal pulse similar to that of V605 Aquilae, causing it to vastly expand. V605 Aquilae, which was discovered in 1919, is the only other star known to have been observed during the high luminosity phase of a very late thermal pulse, and models predict that Sakurai’s Object, over the next few decades, will follow a similar life cycle.

Sakuri’s Object is a star in the constellation of Sagittarius. It is located at the center of a planetary nebula and is believed to currently be in thermal instability and within its final shell helium flash phase.

After retracing their evolution path from the “born-again” giant phase back to the white dwarf cooling track, Sakurai’s Object and other similar stars are expected to end up as helium-rich white dwarfs. There are a few other suspected “reborn” objects, one of which is FG Sagittae. Sakurai’s Object, which erupted in 1995, is expected to have the first well-observed helium flash.

Sakurai’s Object is a highly evolved post-asymptotic giant branch star that has undergone a helium shell flash after a brief period on the white dwarf cooling track (also known as a very late thermal pulse). The star’s mass is estimated to be around 0.6 M☉. Observations of Sakurai’s Object reveal an increase in reddening and pulsing activity, indicating that the star is experiencing thermal instability during its final helium-shell flash.

V4334 Sgr is thought to have been cooling towards a white dwarf with a temperature of around 100,000 K and a luminosity of around 100 L☉ prior to its reignition. The luminosity rapidly increased by a factor of a hundred, and the temperature dropped to around 10,000 K. The star assumed the form of an F class supergiant (F2 Ia). The apparent temperature continued to fall below 6,000 K, and the star, like an R CrB star, was gradually obscured at optical wavelengths by the formation of carbon dust. Since then, the temperature has risen to around 20,000 degrees Celsius.

However, in the 1990s, Sakurai’s object flared up, becoming 10,000 times brighter. That’s because it was in a phase known as a “final flash”. There was enough helium to start a new series of nuclear reactions on the surface of the star.

The new reactions created a powerful “wind” of gas. As this material cooled and clumped together around the star, it formed a cloud of dust. As a result of the star’s light being blocked, it vanished from view. Today, however, the dust is becoming thinner. This has allowed astronomers to re-observe it. Indeed, they have observed that it appears to be blowing giant bubbles into space from above its poles — a fitting finale for a dying star.