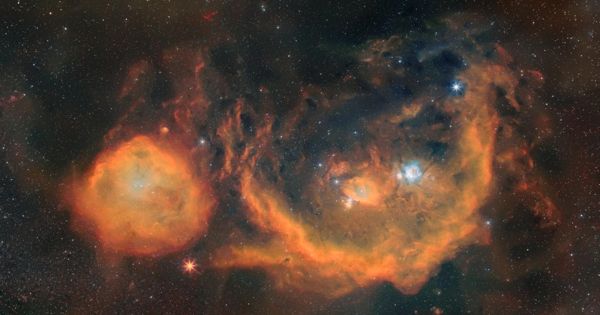 Scientists observe the Brightest Explosions in the Universe

Scientists have obtained the best view yet of the universe’s brightest explosions: a specialized observatory in Namibia has recorded the most energetic radiation and the longest gamma-ray afterglow of a so-called gamma-ray burst. According to the international team, the observations with the High Energy Stereoscopic System (H.E.S.S.) challenge the idea of how gamma-rays are produced in these colossal stellar explosions that are the birth cries of black holes.

Scientists have obtained the clearest picture yet of the universe’s brightest explosions: The most energetic radiation and the longest gamma-ray afterglow of a so-called gamma-ray burst (GRB) have been recorded to date by a specialized observatory in Namibia. According to the international team’s report in the journal Science, the observations with the High Energy Stereoscopic System (H.E.S.S.) challenge the established idea of how gamma-rays are produced in these colossal stellar explosions that are the birth cries of black holes.

“Gamma-ray bursts are bright X-ray and gamma-ray flashes seen in the sky that are emitted by distant extragalactic sources,” explains DESY scientist Sylvia Zhu, one of the paper’s authors. “They are the largest explosions in the universe, caused by the collapse of a rapidly rotating massive star into a black hole. A portion of the liberated gravitational energy is used to generate an ultrarelativistic blast wave. Their emission is divided into two distinct phases: a brief chaotic prompt phase followed by a long-lasting, smoothly fading afterglow phase.”

A specialized observatory in Namibia has recorded the most energetic radiation and the longest gamma-ray afterglow of a so-called gamma-ray burst to date.

Fermi and Swift’s satellites detected a gamma-ray burst in the Eridanus constellation. The event, known as GRB 190829A due to its date of occurrence, turned out to be one of the closest gamma-ray bursts ever observed, with a distance of approximately one billion lightyears. In comparison, the average gamma-ray burst is approximately 20 billion lightyears away. “We were right in the front row when this gamma-ray burst happened,” DESY co-author Andrew Taylor explains. When the afterglow of the explosion became visible to the H.E.S.S. telescopes, the team immediately captured it. “We were able to observe the afterglow for several days and at unprecedented gamma-ray energies,” Taylor reports.

Because of the relatively close proximity to the gamma-ray burst, detailed measurements of the afterglow spectrum, which is the distribution of “colors” or photon energies of the radiation, in the very-high-energy range, were possible. “We were able to determine the spectrum of GRB 190829A up to an energy of 3.3 tera-electronvolts, which is about a trillion times as energetic as visible light photons,” says co-author Edna Ruiz-Velasco of the Max Planck Institute for Nuclear Physics in Heidelberg.

“This is what’s so exceptional about this gamma-ray burst – it happened in our cosmic backyard where the very-high-energy photons were not absorbed in collisions with background light on their way to Earth, as it happens over larger distances in the cosmos.”

The team was able to track the afterglow for three days after the initial explosion. “Our observations revealed curious similarities between the X-ray and very-high-energy gamma-ray emission of the burst’s afterglow,” Zhu reports. The two emission components, according to established theories, must be produced by separate mechanisms: the X-ray component is produced by ultra-fast electrons that are deflected in the strong magnetic fields of the burst’s surroundings. This “synchrotron” process is very similar to how particle accelerators on Earth generate bright X-rays for scientific research.

However, existing theories suggested that even the most powerful explosions in the universe could not accelerate electrons sufficiently to directly produce the observed very high-energy gamma rays. This is because of a “burn-off limit,” which is determined by the balance of particle acceleration and cooling within an accelerator. The production of very-high-energy gamma-rays necessitates the use of electrons with energies well above the burn-off limit. Instead, current theories postulate that during a gamma-ray burst, fast electrons collide with synchrotron photons, boosting them to gamma-ray energies in a process known as synchrotron self-Compton.

However, observations of the afterglow of GRB 190829A show that both components, X-ray and gamma-ray, faded in sync. Furthermore, the gamma-ray spectrum closely matched an X-ray extrapolation. These findings strongly suggest that the X-rays and very-high-energy gamma rays in this afterglow were produced by the same mechanism. “It is rather surprising to observe such remarkably similar spectral and temporal characteristics in the X-ray and very-high-energy gamma-ray energy bands if the emission in these two energy ranges had different origins,” says co-author Dmitry Khangulyan of Tokyo’s Rikkyo University. This poses a challenge for the synchrotron self-Compton origin of the very-high-energy gamma-ray emission.

This possibility has far-reaching implications, emphasizing the importance of further research into very high-energy GRB afterglow emissions. GRB 190829A is only the fourth gamma-ray burst discovered from Earth. The earlier detected explosions, on the other hand, occurred much further away in the cosmos, and their afterglow could only be observed for a few hours at a time, and not at energies greater than one tera-electronvolt (TeV).

“In the future, the prospects for detecting gamma-ray bursts by next-generation instruments like the Cherenkov Telescope Array, which is currently being built in the Chilean Andes and on the Canary Island of La Palma look promising,” says Landessternwarte Heidelberg spokesperson Stefan Wagner. “Because of the general abundance of gamma-ray bursts, we anticipate that regular detections in the very-high-energy band will become more common, allowing us to better understand their physics.”