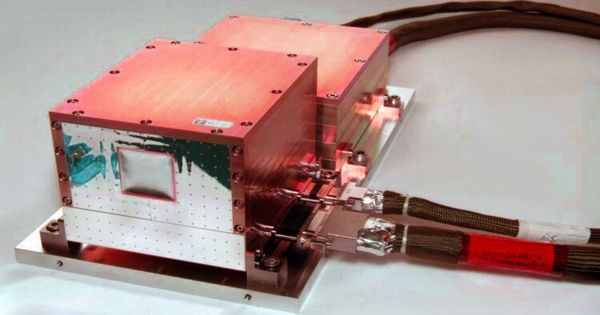 Various nations want to explore the moon in the coming years and decades, and plan to send astronauts there again. Space radiation, on the other hand, poses a significant risk to our inhospitable satellite. For the first time, scientists report on time-resolved measurements of the moon’s radiation. The measurements indicate that the equivalent dose rate is around 60 microsieverts per hour. In comparison, it is about 5 to 10 times lower on a long-haul flight from Frankfurt to New York, and well over 200 times lower on the ground.

The Apollo astronauts carried dosimeters, which performed rudimentary measurements of total radiation exposure during their entire journey to the moon and back. Chinese and German scientists report for the first time on time-resolved measurements of the radiation on the moon in the current issue of the journal Science Advances.

Scientists report for the first time on time-resolved measurements of the radiation on the moon. The measurements show an equivalent dose rate of about 60 microsieverts per hour.

The “Lunar Lander Neutron and Dosimetry” (LND) was developed and built at Kiel University for the German Aerospace Center (DLR) on behalf of the Space Administration, with funding from the Federal Ministry of Economic Affairs and Energy (BMWi). The LND measurements enable the calculation of the so-called equivalent dose. This is necessary in order to calculate the biological effects of space radiation on humans. “The radiation exposure we measured is a good benchmark for the radiation within an astronaut suit,” said co-author Thomas Berger of the German Aerospace Center in Cologne.

The measurements indicate that the equivalent dose rate is around 60 microsieverts per hour. In comparison, it is about 5 to 10 times lower on a long-haul flight from Frankfurt to New York, and well over 200 times lower on the ground. Because astronauts would be on the moon for much longer than passengers flying to New York and back, this represents significant exposure for humans, according to Kiel University’s Robert Wimmer-Schweingruber, whose team developed and built the instrument.

“Humans are not designed to withstand space radiation. During longer stays on the moon, astronauts can and should shield themselves as much as possible, for example, by covering their habitat with a thick layer of lunar soil “Wimmer-Schweingruber, the second author, elaborated. “During long-term stays on the moon, astronauts’ risk of contracting cancer and other diseases could thus be reduced,” said co-author Christine Hellweg of the German Aerospace Center.

The measurements were taken on the Chinese lunar lander Chang’e-4, which landed on the moon’s far side on January 3, 2019. The Kiel device takes measurements during the lunar “daylight,” and, like all scientific equipment, turns off during the extremely cold and nearly two-week-long lunar night to conserve battery power. The device and lander were supposed to take measurements for at least a year, but they have already surpassed that goal. Data from the device and the lander is returned to Earth via the relay satellite Queqiao, which is located behind the moon.

The information gathered is also useful for future interplanetary missions. Because the moon lacks both a protective magnetic field and an atmosphere, the radiation field on its surface is similar to that in interplanetary space, with the exception of the shielding provided by the moon itself. As a result, the LND measurements will be used to review and further develop models that can be used for future missions. For example, if a manned mission to Mars is launched, the new findings will allow us to predict the expected radiation exposure in advance. That’s why it is important that our detector also allows us to measure the composition of the radiation,” said Wimmer-Schweingruber.