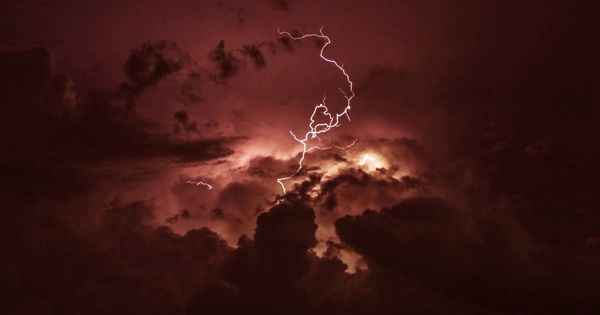 A team of researchers examined the effects of thunderstorms and solar flares on the ionospheric D-region using data collected by an Incoherent Scatter Radar (ISR) (often referred to as the edge of space). Solar flares emitted by the sun and thunderstorms generated on Earth have different effects on the planet’s ionosphere, which has implications for long-distance communications.

A team of researchers working with data from the Arecibo Observatory’s Incoherent Scatter Radar (ISR), satellites, and lightning detectors in Puerto Rico examined the simultaneous impacts of thunderstorms and solar flares on the ionospheric D-region for the first time (often referred to as the edge of space).

The team discovered that solar flares and lightning from thunderstorms cause unique changes to the edge of space, which is used for long-distance communications such as GPS found in vehicles and airplanes, in the first of its kind analysis.

Solar flares jetting out from the sun and thunderstorms generated on Earth impact the planet’s ionosphere in different ways, which have implications for the ability to conduct long-range communications.

The study, led by Caitano L. da Silva, an assistant professor of physics at New Mexico Tech, was recently published in the Nature Publishing Group journal Scientific Reports. “These are very exciting results,” da Silva says. “One of the most important things we demonstrated in the paper is that the signatures of lightning and solar flares are completely different. The first causes electron density depletion, whereas the second cause enhancements (or ionization).”

While the AO radar used in the study is no longer available due to the collapse of AO’s telescope in December 2020, scientists believe that the data they collected, as well as other AO historical data, will be useful in furthering this work.

“This study emphasizes the importance of properly accounting for an energy input from below (from thunderstorms) into the lower ionosphere in order to fully understand the coupling of atmospheric regions,” da Silva says. “The wealth of data collected at AO over the years will be a transformative tool for quantifying lightning effects in the lower ionosphere.”

Improved communications will result from a better understanding of the impact on the Earth’s ionosphere.

da Silva collaborated with a team of researchers at the Arecibo Observatory (AO) in Puerto Rico, a National Science Foundation facility managed cooperatively by the University of Central Florida. The co-authors are AO Senior Scientist Pedrina Terra, Assistant Director of Science Operations Christiano G. M. Brum, and Sophia D. Salazar, an NMT student who spent the summer of 2019 at the AO as part of the National Science Foundation-supported Research Undergraduate Experience. Salazar completed the initial data analysis as part of her internship under the supervision of senior scientists.

“Hands down, the Arecibo Observatory REU is one of the best experiences I’ve had so far,” the 21-year-old says. “The AO staff and REU students’ encouragement and support made the research experience everything it was. There were numerous opportunities to network with scientists from all over the world at AO, many of whom I would not have met if not for the AO REU.”

Electrons are ejected from their trapped orbit and precipitate into the atmosphere, where they produce light, X-rays, and ionization. Previously, scientists believed that effective precipitation of electrons was only caused by waves traveling in tiny tubes of ionization along magnetic field lines called ducts, with lightning only affecting trapped electrons confined to these narrow paths in space.

The new discovery suggests that electromagnetic waves from lightning populate large regions of the radiation belts from which they precipitate electrons, implying that they could potentially influence global loss rates of trapped particles.

Terra and Brum from AO collaborated with Salazar to refine her initial data analysis and provide interpretation for the study. “From the first day of the REU program, Sophia’s dedication and ability to solve problems drew our attention,” Brum says.

“Another remarkable outcome of this work is the presentation for the first time of a mapping of the spatial and seasonal occurrence of lightning strikes over the region of the Puerto Rico archipelago,” Brum says. “Important was also the detection of a lighting activity hotspot concentrated in the western part of Puerto Rico’s La Cordillera Central mountain range.”