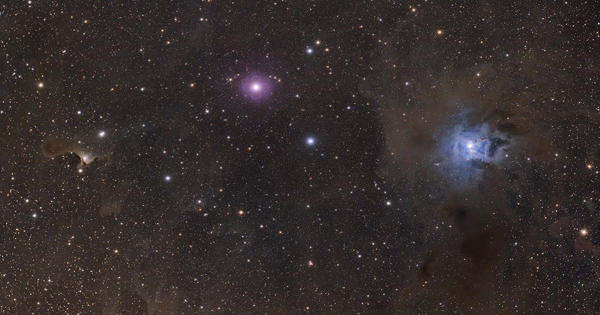 T Cephei is a red supergiant star 329 times larger than the Sun. It is a Mira variable star in the constellation Cepheus. Cepheus constellation lies in the northern hemisphere. It is one of the Greek constellations. Located approximately 570 ± 40 light-years (175 ± 12 parsecs) distant, it varies between magnitudes 5.2 and 11.3 over a period of around 388 days. It is not part of the Cepheus constellation outline but is within the borders of the constellation. This star is considered to be in the late stage of his life, blowing on their sooty atmosphere in the form of a white dwarf in the distant future.

T Cephei is a red giant of spectral type M6-9e with an effective temperature of 2,400 K, a radius of 329 R☉, a mass of 0.55 M☉, and a luminosity of 5,700 L☉. The location of the variable star in the night sky is determined by the Right Ascension (R.A.) and Declination (Dec.), these are equivalent to the Longitude and Latitude on the Earth. The Right Ascension is how far expressed in time (hh:mm:ss) the star is along the celestial equator. If the R.A. is positive then it’s eastwards. The star is moving -45.46 ± 0.89 milliarcseconds/year towards the north and -43.75 ± 0.90 milliarcseconds/year east if we saw them on the horizon. The Declination is how far north or south the object is compared to the celestial equator and is expressed in degrees. For T Cephei, the location is 21h 09m 31.85 and +68° 29` 27.6.

T Cephei estimated radius has been calculated as being 9.58 times bigger than the Sun. If it were in the place of the Sun, its photosphere would at least engulf the orbit of Mars. The Sun’s radius is 695,800km, therefore the star’s radius is an estimated 6,667,754.59.km. This star is believed to be in a late stage of its life, blowing off its own atmosphere to form a white dwarf in the distant future. The star cannot be seen by the naked eye, you need a telescope to see it.