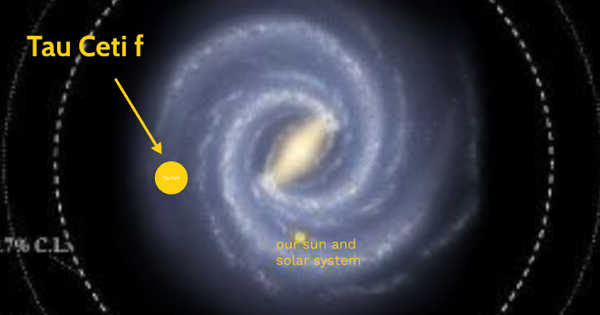 Tau Ceti – a star in the Constellation Cetus

The star Tau Ceti (τ Ceti) is located in the constellation Cetus. It is visible to the naked eye as a third-magnitude star. Observations have revealed that there is more than ten times as much dust surrounding Tau Ceti as there is in the Solar System. Since December 2012, there has been evidence of at least four planets orbiting Tau Ceti, all of which have been confirmed to be super-Earths, with two of these potentially being in the habitable zone.

It has a similar spectrum to the Sun but only 78 percent of the Sun’s mass. It is only about 12 light-years away from the Solar System, making it a relatively close star. It is the nearest single G-class star. The star appears stable and is “metal-deficient” because it is mostly made of hydrogen and helium, just like the Sun. There are four other unconfirmed planets, one of which is a Jovian planet located between 3 and 20 AU from the star. Any planet orbiting Tau Ceti would experience far more impact events than Earth due to its debris disk. Despite this barrier to habitability, the star’s solar analog (Sun-like) characteristics have piqued the public’s interest.

Tau Ceti is surrounded by more than ten times as much dust as the rest of the Solar System. Tau Ceti is most likely orbited by five planets, two of which are habitable. Any planet orbiting Tau Ceti would experience far more impact events than Earth due to its debris disk. Despite this, the star’s Sun-like characteristics have piqued the public’s interest. Tau Ceti is a target for the Search for Extra-Terrestrial Intelligence (SETI), and it appears in some science fiction literature.

Tau Ceti, Latinized from Ceti, is a single star in the constellation Cetus that has a spectral similarity to the Sun despite having only about 78 percent of the Sun’s mass. It is a relatively close star, just under 12 light-years (3.7 parsecs) from the Solar System, and the closest solitary G-class star. The star appears to be stable, with little stellar variation and is deficient in metals. It has an apparent magnitude of 3.5 and can be seen with the naked eye. The Sun would be in the northern hemisphere constellation Boötes, with an apparent magnitude of about 2.6 as seen from Tau Ceti.

Project Ozma looked for intelligent life (SETI) by looking for artificial radio signals in selected stars. The first targets were Tau Ceti and Epsilon Eridani, chosen by astronomer Frank Drake. Both are close to the Solar System and have similarities to the Sun. After 200 hours of observation, no artificial signals were discovered. Subsequent radio searches for this star system have also yielded negative results.

The Tau Ceti system is thought to have a single stellar component. A faint optical companion of magnitude 13.1 has been discovered. It was 137 arcseconds away from the primary as of 2000. It could be gravitationally bound, but it’s more likely a line-of-sight coincidence.

The majority of what is known about Tau Ceti and its system’s physical properties has come from spectroscopic measurements. Tau Ceti’s age, mass, radius, and luminosity can be estimated by comparing the spectrum to computed stellar evolution models. However, measurements of the radius of the star can be made directly to an accuracy of 0.5 percent using an astronomical interferometer. The radius of Tau Ceti has been calculated to be 79.3 percent 0.4 percent of the solar radius using such methods. This is about the size of a star with a slightly lower mass than the Sun.