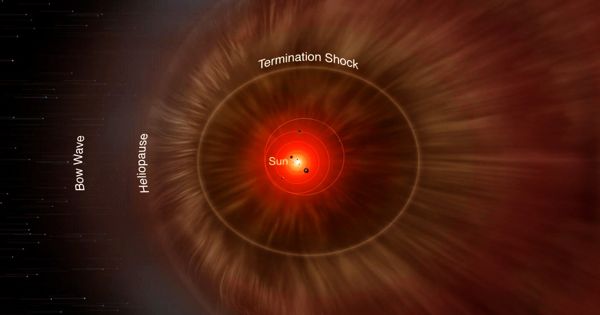 The Boundary of the Heliosphere has been Mapped

The heliosphere’s boundary has been mapped for the first time, providing scientists with a better understanding of how solar and interstellar winds interact. Scientists created the first-ever 3D map of the boundary between our solar system and interstellar space using data from NASA’s IBEX satellite.

Astronomers at the United States’ Los Alamos National Laboratory have created the first 3D map of the heliosphere. The heliosphere is a protective bubble created around our solar system by the solar wind – a constant stream of magnetic field and particles released by the sun – that shields us from harmful interstellar radiation.

“Physics models have theorized this boundary for years,” said Dan Reisenfeld, a scientist at Los Alamos National Laboratory and the paper’s lead author. The paper was published today in the Astrophysical Journal. “However, this is the first time we’ve been able to measure it and map it in three dimensions.”

The heliosphere is a bubble formed by the solar wind, which is a stream of mostly protons, electrons, and alpha particles that extends from the Sun into interstellar space and shields the Earth from harmful interstellar radiation.

For the first time, the boundary of the heliosphere has been mapped, giving scientists a better understanding of how solar and interstellar winds interact.

They used a technique similar to how bats use sonar to make this measurement. “In the same way that bats send out sonar pulses in all directions and use the return signal to create a mental map of their surroundings,” Reisenfeld explained, “we used the Sun’s solar wind, which goes out in all directions, to create a map of the heliosphere.”

They accomplished this by utilizing the IBEX satellite’s measurement of energetic neutral atoms (ENAs) produced by collisions between solar wind particles and interstellar wind particles. The strength of that signal is determined by the amount of solar wind that strikes the heliosheath. When a wave strikes the sheath, the ENA count rises and IBEX detects it.

“The solar wind ‘signal’ sent out by the Sun varies in strength, forming a distinct pattern,” Reisenfeld explained. “Depending on ENA energy and the direction IBEX is looking through the heliosphere, IBEX will see the same pattern in the returning ENA signal two to six years later. We calculated the distance to the ENA-source region in a specific direction using the time difference.”

They then used this method to create the three-dimensional map, which was based on data collected over a full solar cycle, from 2009 to 2019. “By doing so, we are able to see the heliosphere’s boundary in the same way that a bat uses sonar to ‘see’ the cave walls,” he added.

The measurement was carried out by scientists using a technique similar to bat sonar. “Just as bats send out sonar pulses in all directions and use the return signal to create a mental map of their surroundings,” Reisenfeld explained, “we used the Sun’s solar wind, which goes out in all directions, to create a map of the heliosphere.”

Because of the vast distances involved, it takes so long for the signal to return to IBEX. In the solar system, distances are measured in astronomical units (AU), with 1 AU equaling the distance between the Earth and the Sun. According to Reisenfeld’s map, the minimum distance from the Sun to the heliopause is about 120 AU in the direction facing the interstellar wind, and it extends at least 350 AU in the opposite direction, which is the distance limit of the sounding technique. Neptune’s orbit is approximately 60 AU in diameter.