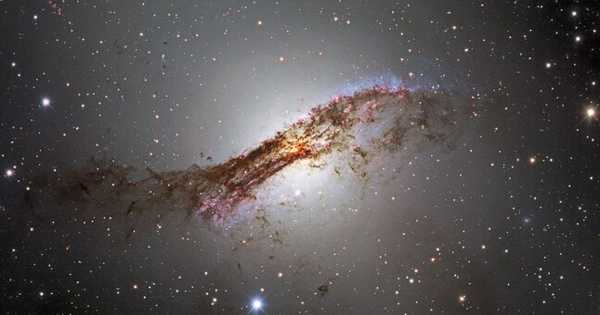 The Dark Energy Camera (DECam) is a newly constructed instrument that is mounted on the Victor M. Blanco 4-meter Telescope at the Cerro Tololo Inter-American Observatory (CTIO) in the Chilean Andes. The Blanco Telescope was built in the 1970s and later upgraded to accommodate the installation of DECam.

Astronomers used the Dark Energy Camera mounted on the Victor M. Blanco 4-meter Telescope at Chile’s Cerro Tololo Inter-American Observatory to capture a spectacular portrait of the galaxy Centaurus A. This galaxy’s unusual appearance—cloaked in dark tendrils of dust—is the result of a previous interaction with another galaxy, and its size and proximity to Earth make it one of the most studied giant galaxies in the night sky.

The leading light in this striking image is the galaxy Centaurus A, which is located over 12 million light-years away in the direction of the southern-hemisphere constellation Centaurus (The Centaur). This image shows the luminous glow of stars as well as the dark tendrils of dust that obscure the galaxy’s bright center. This dust is the result of a previous galactic collision in which a large elliptical galaxy collided with a smaller spiral galaxy. Centaurus A’s dust lane contains widespread star formation, as evidenced by the red clouds of hydrogen and a large number of faint blue stars visible at each end of the dust lane.

A spectacular portrait of the galaxy Centaurus A has been captured by astronomers using the Dark Energy Camera mounted on the Víctor M. Blanco 4-meter Telescope.

Centaurus A is one of the best-studied objects in the southern hemisphere night sky due to its proximity and brightness—it is one of the closest giant galaxies to Earth. Since its discovery in 1826, scientists have studied the galaxy exhaustively using various types of telescopes, revealing a variety of fascinating features. Radio telescopes have discovered a massive jet of matter erupting from the galaxy’s core.

A supermassive black hole at the center of Centaurus A accelerates this jet to nearly half the speed of light, and its bright emissions at radio wavelengths make this galaxy one of the most prominent radio sources in the night sky. In fact, in July 2021, the Event Horizon Telescope captured an image of a jet launching from Centaurus A’s black hole, which is 55 million times the mass of the Sun.

Centaurus A is a dependable target for amateur astronomers in the southern hemisphere, with its bright bulge and dark dust lane visible through binoculars or small telescopes. This image, on the other hand, shows a 10-megapixel subset of the full 570-megapixel Dark Energy Camera (DECam), which is mounted on the Victor M. Blanco 4-meter Telescope at Chile’s Cerro Tololo Inter-American Observatory (CTIO).

The imager’s main component is a set of cutting-edge CCDs (charge-coupled devices), which are similar to but much more sensitive than those found in standard digital cameras. The imager’s 74 CCDs are arranged in a hexagonal pattern on DECam’s focal plane, where images are recorded. A single image could fit 14 copies of the full moon. DECam can be read out in less than 30 seconds, which is faster than most CCD cameras used in astronomy today.

DECam, one of the world’s most powerful wide-field CCD imagers, was built specifically for the Dark Energy Survey and was operated by the Department of Energy (DOE) and the National Science Foundation (NSF) between 2013 and 2019. The DOE-funded DECam, which was built and tested at Fermilab. At the moment, the Dark Energy Camera is used for a wide range of scientific programs.

Unlike consumer-grade cameras, which are used to capture images of very bright objects, astronomical CCDs must be much more sensitive to detect the tiny amount of light that reaches us from faint and/or distant objects. Much of the light emitted by extremely distant galaxies and supernovae has been redshifted into long-wavelength red and infrared light, which conventional CCDs cannot detect.

Monika Soraisam (now at the University of Illinois at Urbana-Champaign) obtained this image as part of a long-term monitoring campaign (between 2018 and 2021) to identify variable objects on timescales ranging from hours to years (novae, long-period variables) in prominent galaxies in the southern hemisphere. The campaign served as a forerunner to the Vera C. Rubin Observatory’s Legacy Survey of Space and Time.