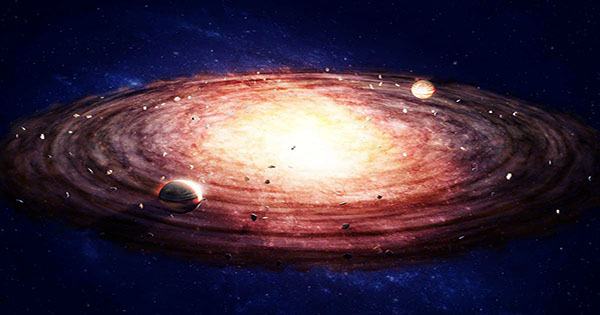 According to recent evidence, the protoplanetary disk from which the Earth and other planets formed had a massive void in it some 4.5 billion years ago. This was most likely around the current site of the asteroid belt. The concept of a gap like this has been offered before, but new evidence backs up past predictions. Observations of very young stars provide us a glimpse of how the early Solar System could have seemed to outsiders. Many of the systems that host gas and dust disks in the creation of planets also have huge gaps in the disk. These once assumed locations where planets had already condensed out of the disk, and this has proven in some situations. Other gaps, on the other hand, appear to be too early in the growth of their disk to be plausible.

Despite the fact that astronomers are not sure what causes these gaps, they raise an obvious question: did our own system formerly have something comparable, and if so, where? A new study published in Science Advances used meteorite magnetism to show that such a canyon existed roughly 3 astronomical units (AU, the distance between Earth and the Sun) from the Sun, near where the greatest concentration of meteorites now exists.

The extreme contrast between the rocky planets of the inner Solar System and the gas giants further out gives the impression that there was a sharp separation when they formed. Prior to this study, planetary scientists had identified a pattern in meteorites that seemed to corroborate the hypothesis of a protoplanetary barrier separating the two worlds. Most meteorites appear to have two separate classes of aluminum isotope ratios, with only a handful in between. The isotopic dichotomy, as opposed to a continuous band, suggests discrete asteroid genesis zones.

Such observations, however, are far from conclusive. Professor Benjamin Weiss of MIT leads a team that specializes in measuring the magnetization of chondrules, which are microscopic dust grains that keep a record of the magnetic conditions in which they developed. Weisz and co-authors measured the magnetic fields in chondrules from two carbonaceous meteorites from Antarctica at 101 microteslas. They had previously discovered that noncarbonaceous chondrules have normal magnetic fields of roughly 50 T, which is similar to the Earth’s current magnetic field.

This came as a complete shock. Carbonaceous meteorites are assumed to have formed 3-7 AU from the Sun, close to Jupiter, whereas noncarbonaceous meteorites are thought to have formed less than 3 AU from the Sun, closer to Jupiter. The magnetic field that molded these meteorites was assumed to have originated from the Sun, leading to the obvious prediction that the field would fade with distance. There is a link between field strength and accretion rate, and the authors could only explain this discrepancy if mass accreted 25 times faster in the outer Solar System than in the inner. The researchers tried to figure out how such a difference might happen and discovered that the most likely cause was a gap within an otherwise inflowing disk of material. This would reduce the amount of gas and dust that may create meteorites in the inner Solar System.

In a statement, MIT graduate student Cauê Borlina remarked, “Gaps are prevalent in protoplanetary systems, and we now prove that we had one in our own Solar System.” “This provides proof that gaps alter the composition of planets and answers the strange contradiction we witness in meteorites.” There are several alternative theories for the disparity. Jupiter’s massive gravity may have pushed material out of the relevant range if it had already begun to develop by the time the chondrules compacted. Alternatively, the Sun’s expanding magnetic field and solar wind might have collided, blasting material away, or the winds could have formed an initial gap, which Jupiter later strengthened.