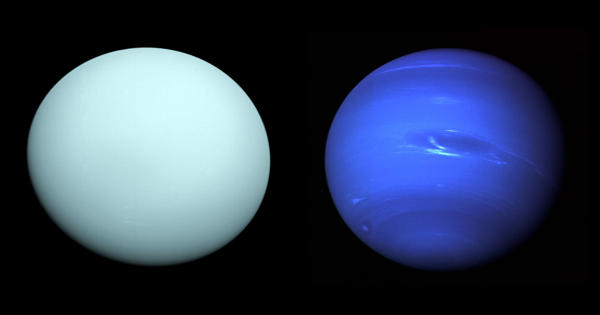 The magnetic mystery remains unsolved of Uranus and Neptune

The planets Uranus and Neptune have a skewed magnetic field, most likely due to their unique internal structures. Some scientists believe that the planets’ nondipolar magnetic fields are caused by a unique geometry of their icy mantle, which includes a thin convective layer on top of a stratified non-convective layer.

H2O and NH3 are representative materials found in the mantle of giant ice planets on both planets. The presence of superionic H2O and NH3 has been proposed as a possible explanation for the stabilization of such non-convective regions. However, a lack of experimental data on the physical properties of those superionic phases has prevented this issue from being resolved.

Uranus and Neptune, two large gas planets, have unusual magnetic fields. Each of these is strongly tilted relative to the planet’s rotation axes and is significantly offset from the planet’s physical center. The reason for this has long been a mystery in planetary sciences. Various theories propose that this strange phenomenon is caused by a unique inner structure of these planets. The skewed magnetic field, according to these theories, is caused by circulations in a convective layer composed of an electrically conductive fluid. This convective layer in turn surrounds a stably layered, non-​convective layer in which there is no circulation of the material due to its high viscosity and thus no contribution to the magnetic field.

Uranus and Neptune both have a completely skewed magnetic field, perhaps due to the planets’ special inner structures. But new experiments by ETH Zurich researchers now show that the mystery remains unsolved.

Both planets’ strange magnetic fields are strongly tilted in relation to the planet’s rotation axes and are significantly offset from the planet’s physical center. The reason for this has long been a mystery in planetary sciences.

Many theories propose that a skewed magnetic field was caused by circulations in a convective layer of an electrically conductive fluid.

Water and ammonia, the main components of Uranus and Neptune, enter an unusual state at very high pressures and temperatures, according to computer simulations: a “superionic state,” which has the properties of both a solid and a liquid. In this state, hydrogen ions become mobile within the oxygen or nitrogen lattice structure.

Recent experimental studies confirm the existence of superionic water at the depth where, according to theory, the stably layered region exists. As a result, the stratified layer could be formed by superionic components. However, because the physical properties of the superionic state are unknown, it is unclear whether the components are actually capable of suppressing convection.

Scientists used computer simulations to discover that H2O and NH3 enter a superionic state in this study. In this state, hydrogen ions become mobile within the oxygen or nitrogen lattice structure.

Ammonia was used in high-pressure and high-temperature experiments by scientists. They wanted to know how pliable the superionic material was.

A diamond anvil cell, a high-pressure apparatus, was used by the researchers. They placed ammonia in a small container with a diameter of about 100 micrometers that was clamped between two diamond tips that compressed the sample, exposing materials to extremely high pressures like those found inside Uranus and Neptune. Scientists heated the material sample to over 2,000 degrees Celsius using an infrared laser. They used a green laser to illuminate the sample at the same time.

The wave spectrum of the scattered green laser light was then estimated. Scientists were able to determine the elasticity of the material as well as the chemical bonding in ammonia by doing so. Scientists discovered a new ammonia phase while conducting the experiments: a new superionic ammonia phase ( phase). Scientists believe that such a new phase may exist in Uranus and Neptune’s deep interiors.

Kimura and Murakami discovered a new superionic ammonia phase (phase) with elasticity similar to that of the liquid phase in their measurements. This new phase may be stable in Uranus and Neptune’s deep interiors and thus occur there. However, because superionic ammonia behaves like a liquid, it is insufficiently viscous to contribute to the formation of the non-convective layer.

The question of what properties superionic water has inside Uranus and Neptune has become even more pressing in light of the new findings. Because the mystery of why the two planets have such an irregular magnetic field remains unsolved to this day.

However, because the phase has an elasticity similar to that of the liquid phase, it would not be viscous enough to contribute to the formation of a non-convective layer.