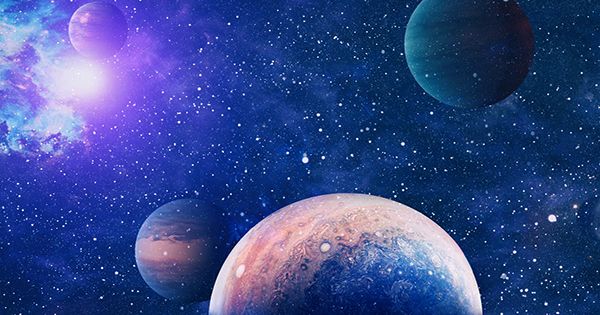 Planets outside our Solar System are much more numerous than previously imagined, as evidenced by recent decades. The majority, like us, revolve around a single star. Some arise in unusual circumstances, such as orbiting two stars. Astronomers have discovered evidence for what could be the first planet to orbit three stars at the same time. The system in question, known as GW Orionis, is 1,300 light-years away in the constellation Orion and consists of two stars that round each other every 241 days, with a third star orbiting the other two every 11.5 years.

Astronomers were already familiar with the system because it has a huge protoplanetary disk — the doughnut of material from which planets originate – made up of three misaligned rings. Because this is unique, astronomers wanted to know why the rings were misaligned. Astronomers performed simulations to calculate how the disk became so misaligned in recent research published in the Monthly Notices of the Royal Astronomical Society and discovered a shocking result: it cannot be the torque of the three stars alone. Instead, they propose the presence of one or more huge undiscovered planets.

Between the innermost ring and the other two, there is a massive chasm of roughly 15 billion kilometers. Some have proposed that the large gap formed by the three stars’ torque pulling apart their disk, but the team believes that their proposal of an unseen planet fits better. Dr. Jeremy Smallwood of the University of Nevada told IFLScience, “We show that the torque is not actually strong enough to destroy the disk.” “After that, we looked at the possibility of a planet carving a hole in the disk. We compared our simulation to observations and found that they were rather accurate.”

The researchers considered various possibilities for planets forming and/or evolving with a tilt in relation to the system’s stars. A huge planet passing through the disk will gain very quickly and grow in size — at least if the disk is thin. If the disk is thicker, however, the scientists’ gap should close with time unless the planet is very small. As a result, a planet, or numerous planets, could be useful in several scenarios.

Unfortunately, if a planet or numerous planets exist, they will be difficult to detect. Misaligned, or titled, planets are difficult to discover using the transit method, which involves a dip in a star’s brightness indicating a body passing in front of it. However, it is not out of the question. High-resolution imaging of the system would provide the greatest evidence of the planet or planets, albeit that accuracy may be beyond observatories’ capabilities at this time due to the system’s distance of nearly 1,000 light-years.