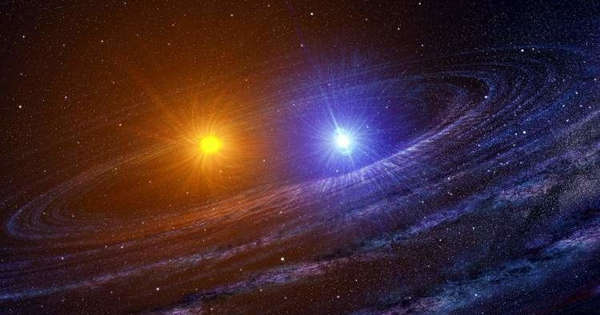 There are billions of red dwarf stars in our galaxy, all of which are too dim to see with the naked eye. Their small masses — a few tenths that of the Sun — cause them to be much cooler and dimmer than our own Sun, which lies at the faint, red end of the Hertzsprung-Russell diagram. In fact, only a few of these stars have been discovered beyond a dozen or so parsecs from our solar system. Some of these stars, however, belong to the spectacular class of variables known as flare stars or UV Ceti variables.

W.J Luyten discovered the star system in 1948 while compiling a catalog of stars with high proper motion; he noted its exceptionally high proper motion of 3.37 arc seconds annually and cataloged it as Luyten 726-8.

The known flare stars have spectral types ranging from late M to late K, corresponding to temperatures ranging from about 2500 to 4000 K. They frequently have detectable hydrogen and calcium emission lines in their spectra, indicating chromospheric activity. They have masses ranging from 0.1 to 0.6 times that of the Sun; some brown dwarfs may exhibit flaring activity, though research into these stars is still in their early stages. Many of the known flare stars are members of young stellar associations (e.g., the Orion and Taurus star-forming regions), though there are some older flare stars. Many are also known to be binary stars, and this may correspond to an increased likelihood of activity.

Both stars are subject to change. The most spectacular is Luyten 726-8B, which has been designated as a variable star by the designation UV Ceti (the other star is also known as BL Ceti). Although UV Ceti was not the first flare star discovered, it is the most well-known, and similar flare stars are now known as UV Ceti-type variable stars. This star undergoes fairly extreme brightness changes: for example, in 1952, its brightness increased by 75 times in only 20 seconds. UV Ceti is an M6.0e spectral type red dwarf.