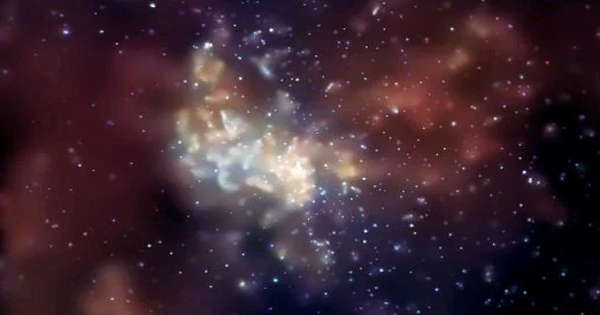 The Luminous Blue Variable’s position in the night sky is determined by the Right Ascension (R.A.) and Declination (Dec.), which are equivalent to Longitude and Latitude on Earth. V4650 Sgr was discovered in 1996 as star 362 in a list of stars near the Quintuplet Cluster in the galactic center region. Because the acronym qF is used for stars in the list, the star’s name is qF 362. FMM 362 is also abbreviated as FMM 362. It wasn’t until 1999 that the LBV nature of qF 362 was recognized. It is one of three LBVs near the Quintuplet Cluster, all of which are highly luminous stars.

Infrared telescopes were used to discover V4650. Because of interstellar extinction, it is extremely faint at optical wavelengths. The 2MASS survey assigned it a red magnitude of 17 and a blue magnitude of 19, while it is a 7th magnitude object in the K band infrared.

Although this star cluster is named after its five brightest stars, it is home to hundreds more. This NASA/ESA Hubble Space Telescope image clearly shows the cluster’s large number of massive young stars.

The Arches Cluster is nearby, and it is only 100 light-years from the center of our galaxy. Because of the cluster’s proximity to the dust at the center of the galaxy, much of its visible light is blocked, which contributed to its obscurity until 1990, when it was revealed by infrared observations. Infrared images of the cluster, such as the one shown here, allow us to see through the dust to the hot stars within.

V4650 Sgr is estimated to be one of the most luminous stars known, with a luminosity ranging from 1,700,000 to 7,943,000 L. Although it has not been observed to change the temperature from the S Doradus minimum strip to a cooler outburst state, it is thought to be a genuine luminous blue variable. The brightness of the infrared spectrum has ranged between magnitudes 7.0 and 7.9. It has a calculated temperature of 11,300 K and a radius of 350 R. V4650 Sgr, unlike the two nearby LBVs, which has no detectable associated nebulosity.