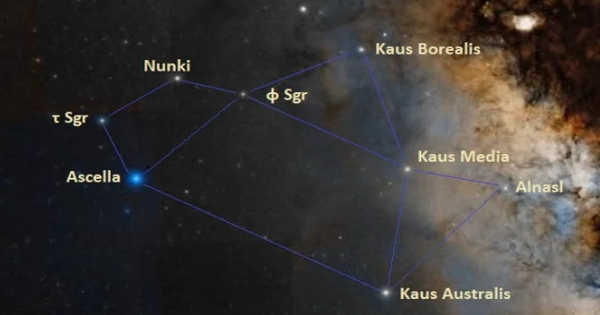 V4998 Sagittarii is a luminous blue variable star (LBV) in the Sagittarius constellation. The star is about 7 pc (23 ly) away from a starburst cluster known as the Quintuplet cluster, which is located about 25,000 light-years away. It has an ejection nebula that is over 0.8 pc in diameter and was formed by large eruptions 5000-10,000 years ago. The star has a mass comparable to the Pistol star and a luminosity of approximately 4,000,000 times that of the Sun (L). This makes the star one of the most massive and luminous stars ever discovered.

The star was discovered during a survey in 1993 that looked for bright near-infrared sources within 0.55°2 of the galactic center. The survey used 1–20 micron photometry and a two-channel InSb detector on Australia’s 1-meter ANU telescope. 50 objects were chosen, with the majority having bolometric magnitudes less than -5. The star was discovered in May 1987. It was noted for its position, JHKLNMQ magnitudes, right ascension, declination, and silicate absorption. Tetsuya Nagata, A. R. Hyland, S. M. Straw, Shuji Sato, and Kimiaki Kawara conducted the survey.

The survey named the star NHS93 22; NHS standing for the three leading scientists in the survey (Nagata, Hyland, and Straw), 93 signifying the date of discovery, and 22 indicating that it was the 22nd star observed.

The high mass of V4998 Sgr compresses its core and accelerates fusion, primarily via the CNO cycle, resulting in a luminosity of about 4,000,000 L and a temperature of 12000 K. It has a large ejection nebula with a diameter of about 0.8 parsecs (2.5 ly) and a mass of 6.2 million solar masses. Because comparable nebulae typically last no more than 10,000 years, V4998 Sagittarii is thought to have experienced a massive eruption between 5000 and 10,000 years ago.

The star is about 7 parsecs (23 light-years) away from the Quintuplet starburst cluster, which is located in the direction of the Galactic center. Around 100 O-type stars and several Wolf–Rayet stars can be found in the cluster. Aside from V4998 Sagittarii, there are two other luminous blue variables: the Pistol star and qF362.

The star’s rapid mass loss, combined with its eruptions, will strip away its hydrogen layers, revealing a hot helium core. It will then move on to the Wolf–Rayet sequence. When it develops a large iron core, the star will collapse in on itself and explode as a Type Ib or Ic supernova. The remnant will be a neutron star or a black hole, depending on how much mass was lost before the supernova explosion. The most massive stars, such as this one, are predicted to have a black hole.