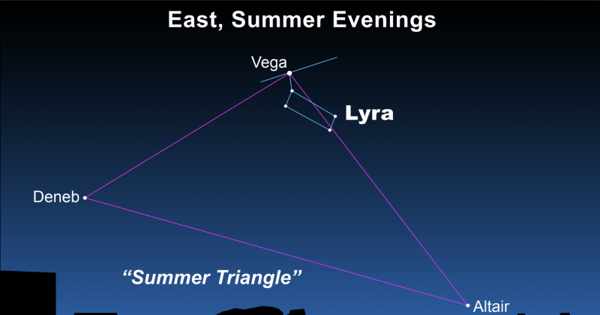 Vega – the Brightest Star in the Constellation Lyra

Around 12,000 BC, Vega was the northern pole star, and it will be again around the year 13,727. Vega was the first star other than the Sun to be photographed, and its spectrum was the first to be recorded. It was one of the first stars whose distance could be calculated using parallax measurements. Vega has been used to calibrate the astronomical brightness scale.

Vega is only a tenth the age of the Sun, but because it is 2.1 times as massive, its expected lifetime is also a tenth of the Sun’s. Both stars are currently nearing the midpoint of their lives. On midsummer nights, it is almost directly overhead at mid-northern latitudes. Vega only sinks below the horizon for 7 hours per day and can be seen at any time of year.

Vega is devoid of elements heavier than helium. Vega is thought to be a variable star whose magnitude varies slightly on a regular basis. At the equator, it is spinning quickly, with a velocity of 274 km/s. Because of centrifugal effects, the equator bulges outward, resulting in a temperature variation across the star’s photosphere that reaches a maximum at the poles. Vega is visible from Earth in the direction of one of these poles.

Vega appears to have a circumstellar disk of dust based on observed excess emission of infrared radiation. This dust is most likely the result of collisions between objects in an orbiting disk of debris, similar to the Solar System’s Kuiper belt. Vega-like stars are stars that have an infrared excess due to dust emission. Irregularities in Vega’s disk also point to the presence of at least one planet, most likely Jupiter-sized.