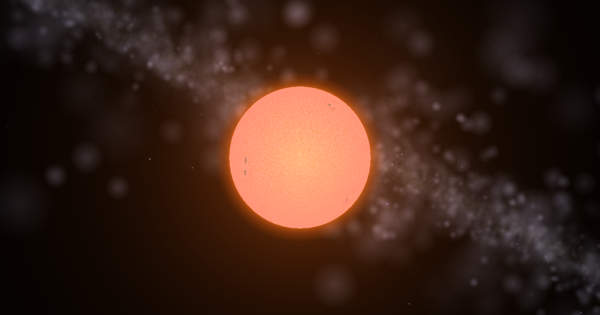 VX Sagittarii is a red hypergiant star in the constellation Sagittarius, located in the southern hemisphere. It is an extreme asymptotic giant branch star located in the constellation Sagittarius, more than 1.5 kiloparsecs from the Sun. It has a radius over a thousand times that of the Sun, making it one of the largest stars known. It is a pulsating variable star with a very wide magnitude range.

The star has become puffy because it has depleted the original hydrogen fuel in its core. It is now “burning” other elements. As the core’s temperature rises, radiation pushes outward on the surrounding gas.

The star has a pulsational period of 732 days and is classified as a cool semiregular variable of type SRc. The variations have an amplitude comparable to a long period variable at times but are much smaller at other times. The spectral type ranges from M4e near the visual maximum to M9.8e at low light, and the luminosity class is Ia, indicating a bright supergiant. The emission lines in the spectrum indicate that the star is losing mass due to a strong stellar wind.

VLBI was used to measure the annual parallax of VX Sagittarii, which was found to be 0.640.06 mas, indicating a distance of about 5,100 light-years. This corresponds to the distance from Sagittarius OB1, the stellar association to which VX Sagittarii is thought to belong. Its radial velocity and proper motions are also consistent with the rest of the association’s members.

At nightfall, Sagittarius is low in the south. Look for an eight-star cluster that resembles the outline of a teapot. VX Sagittarii towers over the teapot. It’s over 5,000 light-years away and hidden behind dust clouds, so despite its brilliance, you’ll need a telescope to see it.

The estimated luminosity of VX Sagittarii is about 195,000 times that of the Sun, and its temperature ranges from 2,900 K near the minimum to 3,200-3,400 K near the maximum. Temperatures in this range are comparable to the coolest stars on the asymptotic giant branch (AGB) and are extremely rare for a massive supergiant.

VX Sagittarii’s effective temperature appears to be highly variable, ranging from around 2,400 K at visual minimum to around 3,300 K near maximum. Temperatures this low are comparable to the very coolest AGB stars and unprecedented for a massive supergiant. During the pulsations of the star, its atmosphere is highly extended, irregular, and variable, but the bolometric luminosity varies much less than the visual brightness and is estimated to be around 195,000 L. The radius is expected to be between 1,120 R and 1,550 R at an effective temperature of 3,300 K. Higher luminosities were frequently calculated in older studies.

VX Sgr’s atmosphere contains molecular water layers and SiO masers, which are typical of an OH/IR star. The masers were used to calculate an exact distance of 1,590 parsecs. The spectrum also shows a lot of VO and CN. In many ways, the atmosphere is similar to that of low mass AGB stars like Mira variables, but with supergiant luminosity and size.