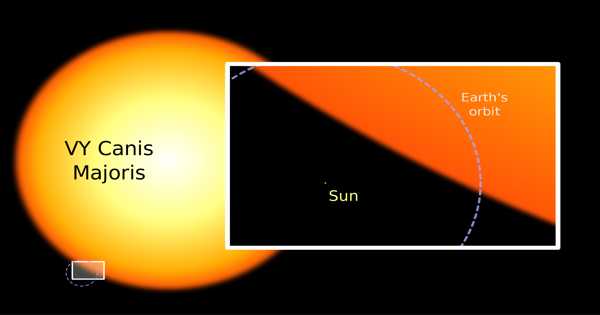 VY Canis Majoris is 1,420 times the size of the Sun. VY Canis Majoris’ surface would extend beyond Jupiter’s orbit if placed in the center of the Solar System. However, there is still some uncertainty in the size estimates because other estimates of the radius make it larger than Saturn’s orbit.

VY CMa has a radius that is roughly 1,420 times that of the Sun (R☉), which is close to the modeled maximum, the Hayashi limit, which has a volume nearly 8 billion times that of the Sun. If this midpoint estimate is correct, a quantum of light traveling at the speed of light would take 6 hours to circle the Earth, compared to 14.5 seconds for the Sun. If this star replaced the Sun its surface would, per this approximation, be beyond the orbit of Jupiter.

VY CMa is a single star with a period of about 2,001 days that is a “semiregular” variable. It has a density of 5 to 10 mg/m3 on average. There is no evidence that it is part of a multi-star system. It’s high infrared (IR) excess makes it one of the brightest objects in the local region of the galaxy at wavelengths ranging from 5 to 20 microns (µm), indicating a dust shell or heated disk. It is approximately 17±8 times the mass of the Sun (M☉).

Because of its mass loss, it is surrounded by a complex asymmetric circumstellar envelope (CSE). It was one of the first radio masers discovered and produces strong molecular maser emission. VY CMa is embedded in the large molecular cloud Sh2-310, a large, local star-forming H II region with a diameter of 480 arcminutes or 681 light-years (209 pc).

It’s about 3,900 light-years away, so it appears to us as a faint star (with telescopes), despite being as bright as 300,000 suns. Astronomers have been curious about this star because, like Betelgeuse in late 2019 and early 2020, its brightness has faded. VY Canis Majoris, on the other hand, has faded gradually over the last couple of centuries. Astronomers using the Hubble Space Telescope announced on March 4, 2021, that they believe they know why. They claim that this aging star is ejecting massive clouds of gas, resulting in dust that is gradually blocking more and more of its light.

When it dies, it is expected to explode into a Supernova before collapsing into a Black Hole.

Jerome Lalande, a French astronomer, is credited with being the first to record VY CMa. On March 7, 1801, it is listed as a 7th magnitude star in its star catalog. The apparent magnitude of a star is a unit of measurement for its brightness as seen from Earth. The greater the magnitude of a star, the less bright it is.