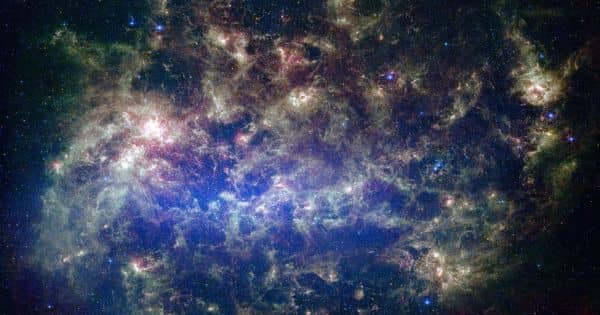 The star is often considered to be a foreground object; much closer than the LMC, probably in the Milky Way, and therefore is potentially much smaller and less luminous. The power of this particular star is such (340,000 times that of the Sun) that to receive the same light flux as Earth does from the Sun, any planet would have to be a whopping 600 AUs out — six hundred times as far from UY Scuti as we are from the Sun.  The star is calculated as being about 281175.30 light-years away from Earth.

This would correspond to a volume 25.8 billion times bigger than the Sun. The star is roughly 17,781,325,623.66 Astronomical Units from the Earth/Sun give or take a few. If placed at the center of the Solar system its photosphere would engulf the orbit of Saturn and reach about 3/4 the distance to Uranus’s orbit. An Astronomical Unit is the distance between Earth and the Sun. The number of A.U. is the number of times that the star is from the Earth compared to the Sun.