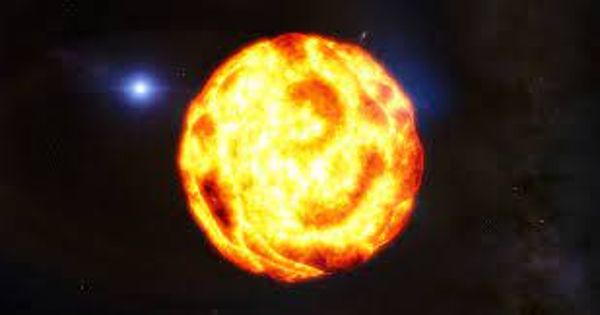 WOH G64 does not belong to the Milky Way galaxy, but to one of its satellites, the Large Magellanic Cloud (LMC). It is surrounded by an optically thick dust envelope of roughly a light-year in diameter containing 3 to 9 times the Sun’s mass of expelled material that was created by the strong stellar wind. The star is between 1,540 and 2,575 times larger than the Sun. If placed at the center of the Solar System, the star’s photosphere would engulf the orbit of Jupiter. It is surrounded by a thick envelope of dust about a light-year across. It is also one of the coolest stars in the LMC, with an effective temperature of 3,400 Kelvin. The envelope consists of material expelled from the star. It is a possible Mira variable.

WOH G64 was discovered in the 1970s by Bengt Westerlund, Olander and Hedin. Like NML Cygni, the “WOH” in the star’s name comes from the names of its three discoverers, but in this case refers to a whole catalogue of giant and supergiant stars in the LMC. With a visual magnitude of 18.46, the star is invisible to the naked eye and cannot be seen in amateur telescopes.

The distance of WOH G64 is assumed to be around 50,000 parsecs (160,000 ly) away from Earth since it appears to be in the LMC. It has so far expelled between 3 and 9 solar masses of material – between a tenth and a third of its initial mass – through a strong stellar wind. The Gaia Data Release 2 parallax for WOH G64 is –0.2280±0.0625 mas and the negative parallax does not provide a reliable distance. The star has a possible companion, a dwarf star of the spectral type O, with a luminosity about 100,000 times that of the Sun.

WOH G64 is likely the largest, coolest, and most luminous red supergiant in the galaxy. It varies regularly in brightness by over a magnitude at visual wavelengths with a primary period of around 800 days. However, at visual wavelengths, the star is hidden by more than 6 magnitudes of interstellar extinction, and the variation in brightness is considerably smaller in the infrared part of the spectrum. The star suffers from over six magnitudes of extinction at visual wavelengths, and the variation at infra-red wavelengths is much smaller. If it were placed in the center of our solar system, it would extend well beyond the orbit of Jupiter, possibly even Saturn.

The spectral type of WOH G64 is given as M5, but it is usually found to have a much cooler spectral type of M7.5, highly unusual for a supergiant star. The nebular emission lines have an unusual spectrum, with the hot gas that is rich in nitrogen and has a radial velocity that is significantly more positive than the stars.

. With an apparent magnitude of 0.9, the galaxy appears as a hazy cloud on a clear night, but due to its southern location, it is invisible to most northern observers. WOH G64 is classified as an extremely luminous M class supergiant and is likely to be the largest star and the most luminous and coolest red supergiant in the LMCIt can only be seen from locations south of latitude 20° N.