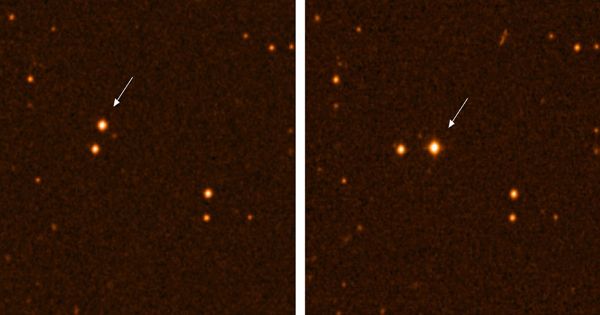 Wolf 359 is a faint red dwarf located only 7.86 light years away in the constellation Leo. It is a red dwarf star located in the constellation Leo, near the ecliptic. It is one of the nearest stars to the Sun. At a distance of approximately 7.9 light years from Earth, it has an apparent magnitude of 13.54 and can only be seen with a large telescope. Like red dwarf stars in Earth’s night sky, the star is much too dim to be visible to the naked Human eye.

Wolf 359 is extremely faint star is the third closest to Sol after Alpha Centauri 3 and Barnard’s Star. It is one of the nearest stars to the Sun; only the Alpha Centauri system (including Proxima Centauri), Barnard’s Star and the brown dwarfs Luhman 16 and WISE 0855−0714 are known to be closer. It is located only about 7.8 light-years away in the east central part of Constellation Leo, the Lion – south of Chertan or Coxa (Theta Leonis). Its proximity to Earth has led to its mention in several works of fiction. With an apparent magnitude of 13.54, it is invisible to the naked eye and can only be seen in larger telescopes.

Wolf 359 was the primary of the Wolf system. This system, located approximately eight light-years from Sol, was in the Alpha Quadrant.

Max (Maximilian Franz Joseph Cornelius) Wolf (1863-1932), a pioneer of astrophotography who discovered hundreds of variable stars and asteroids, as well as about 5,000 nebulae, by analyzing photographic plates and developing the “dry plate” in 1880 and the “blink comparator” in 1900 with the Carl Zeiss optics company in Jena, Germany, discovered its high proper motion photographically.

Wolf 359 is one of the faintest and low-mass stars ever discovered. The photosphere, or light-emitting layer, has a temperature of about 2,800 K, which is low enough for chemical compounds to form and survive. In the spectrum, absorption lines of compounds such as water and titanium(II) oxide have been observed. If Wolf 359 were to replace our Sun, Sol, an observer on Earth would need a telescope to see its round shape clearly, and daylight would be very dim, only ten times brighter than full moonlight with Sol.

Recently, the Hubble Space Telescope was used to look for faint companions to Wolf 359. The magnetic field on the surface is stronger than the average magnetic field on the Sun. Wolf 359 is a flare star that can experience brief increases in luminosity due to magnetic activity caused by convection. Space telescopes have observed strong bursts of X-ray and gamma-ray radiation from these flares. Wolf 359 is a young star, having been around for less than a billion years. Two planetary companions are suspected, but no debris disks have been discovered as of yet.