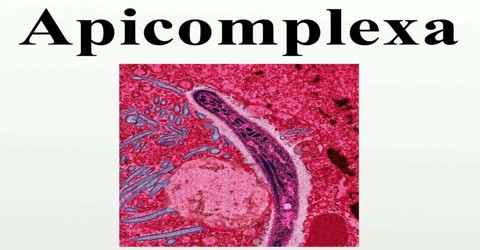 Apicomplexa is a phylum comprised of organisms (also called apicomplexans) such as coccidian, gregarines, piroplasm, haemogregarines, and plasmodia. All apicomplexans are parasitic and lack contractile vacuoles and locomotor processes. Apicomplexans live within the body cavities or the cells of almost every kind of animal, including other apicomplexans. Some genera are pathogenic: Plasmodium causes malaria, and Eimeria and Isospora cause coccidiosis. Apicomplexans feed by absorbing either dissolved food ingested by the host (saprozoic nutrition) or the host’s cytoplasm and body fluids. Apicomplexans form spores and reproduce sexually in an alternation of generations; many have complex life cycles and are transmitted to animal’s hosts by bloodsucking insects. Apicomplexans include the organisms that were once classified as sporozoans, including the protozoans that cause malaria and toxoplasmosis.

The Apicomplexa are a diverse group that includes organisms such as the coccidia, gregarines, piroplasms, haemogregarines, and plasmodia. Diseases caused by Apicomplexa include:

The apicomplexans are characterized by having an apical complex. It is a special organelle that appears as a conical structures on the tapered end (or the apical end) of the cell. It contains rhoptries, micronemes, polar rings, and conoid. The apicomplexa have complex life cycles that are characterized by three distinct processes: sporogony, merogony and gametogony. Although most apicomplexa exhibit this overall general life cycle the details can vary between species. Furthermore, the terminology used to describe these various life cycle stages vary between the species. The life cycle consists of both asexually reproducing forms and sexual stages. In monoxenous species all three of these processes will be carried out in a single host and often in a single cell type or tissue. Whereas, in heteroxenous species the various processes will be carried out in different hosts and generally involve different tissues.

The basic life cycle may be said to start when an infective stage, or sporozoite, enters a host cell, and then divides repeatedly to form numerous merozoites. Some of the merozoites transform into sexually reproductive cells, or gamonts. Gamonts join together in pairs and form a gamontocyst. Within the gamontocyst, the gamonts divide to form numerous gametes. Pairs of gametes then fuse to form zygotes, which give rise by meiosis to new sporozoites, and the cycle begins again. Apicomplexans are transmitted to new hosts in various ways; some, like the malaria parasite, are transmitted by infected mosquitos, while others may be transmitted in the feces of an infected host, or when a predator eats infected prey. Apicomplexa are an extremely large and diverse group. Seven species infect humans. Plasmodium, as the causative agent of malaria, has the greatest impact on human health. Babesia is a relatively rare zoonotic infection. The other five species are all classified as coccidia. However, recent molecular data indicates that Cryptosporidium is more closely related to the gregarines than to the coccidia. The coccidia are generally considered opportunistic pathogens and are often associated with AIDS. Several apicomplexan parasites are also important in terms of veterinary medicine and agriculture. Most notable are Babesia and Theileria in cattle and Eimeria in poultry.

Apicomplexa contains a large assortment of single celled eukaryotic organisms, known to parasitise vertebrates (including humans) and invertebrate hosts. The feature that unifies Apicomplexa with other alveolates (Alveolata) is a distinct membrane complex that envelopes all infective stages. The outermost membrane part is called plasmalema. The inner part is composed of two membranes runnig parrallel to each other forming the flattened inner membrane complex.  The pellicle is interrupted at the anterior end by the polar rings associated with the apical complex and a single or several micropores. Besides the above, they are comprised of endosymbiontic derived organelles (mitochondrion, apicoplast), universal eukaryotic organelles (nucleus, endoplasmic reticulum, Golgi apparatus, ribosomes), and specific compartments (i.e. acidocalcisomes), all enclosed by a complex membranous structure termed the pellicle. Apicomplexans have a unique gliding capability which enables them to cross through tissues and enter and leave their host cells. This gliding ability is made possible by the use of adhesions and small static myosin motors. Other features common to this phylum are a lack of cilia, sexual reproduction, use of micropores for feeding, and the production of oocysts containing sporozoites as the infective form.

Most apicomplexans have an apicoplast, a nonphotosynthetic plastid and mitochondrial and nuclear genomes, although Cryptosporidium species and gregarines are possible exceptions, as they are thought to have lost their plastids after the diverging last common ancestor of apicomplexans.