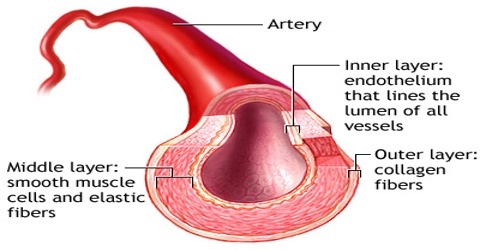 Artery is any of the blood vessels that carry oxygenated blood away from the heart to the body’s cells, tissues, and organs. Arteries are flexible, elastic tubes with muscular walls that expand and contract to pump blood through the body. Arteries are part of the circulatory system, which delivers oxygen and nutrients to every cell in the body. Arteries are part of the efferent wing of the circulatory system. “Efferent” from the Latin “ex”, out + “ferre”, to bear = to bear out or carry away. What the arteries are carrying away is blood from the heart.

In developed countries, the two leading causes of death, myocardial infarction (heart attack), and stroke, may each directly result from an arterial system that has been slowly and progressively compromised by years of deterioration. Arterial formation begins when endothelial cells begin to express arterial specific genes, such as ephrin B2.

Structure and Functions of Artery

Arteries are the blood vessels that deliver oxygen-rich blood from the heart to the tissues of the body. Each artery is a muscular tube lined by smooth tissue and has three layers: The largest artery is the aorta, the main high-pressure pipeline connected to the heart’s left ventricle. The arteries’ smaller branches are called arterioles and capillaries. The pulmonary arteries carry oxygen-poor blood from the heart to the lungs under low pressure, making these arteries unique. There are some functions of arteries:

Among the ancient Greeks, the arteries were considered to be “air holders” that were responsible for the transport of air to the tissues and were connected to the trachea. This was as a result of finding the arteries of the dead devoid of blood.