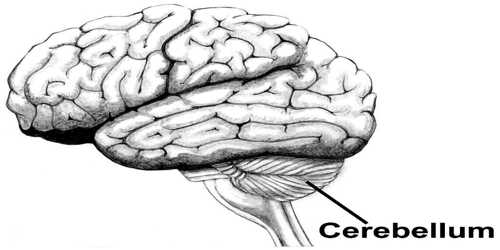 Cerebellum is the part of the vertebrate brain that is located below the cerebrum at the rear of the skull and that coordinates balance and muscle activity. In mammals, the cerebellum is made up of two connecting hemispheres that consist of a core of white matter surrounded by Gray matter. In Latin, the word cerebellum means little brain. The cerebellum contains hundreds of millions of neurons for processing data. It relays information between body muscles and areas of the cerebral cortex that are involved in motor control. In humans, the cerebellum plays an important role in motor control, and it may also be involved in some cognitive functions such as attention and language as well as in regulating fear and pleasure responses, but its movement-related functions are the most solidly established.

The cerebellum is located behind the top part of the brain stem, where the spinal cord meets the brain and is made of two hemispheres (halves). It is involved in the control of voluntary and involuntary movement as well as balance.

Cerebellum Lobes: The cerebellum can be subdivided into three lobes that coordinate information received from the spinal cord and from different areas of the brain. The anterior lobe receives input primarily from the spinal cord. The posterior lobe receives input primarily from the brainstem and cerebral cortex. The flocculonodular lobe receives input from the cranial nuclei of the vestibular nerve. The vestibular nerve is a component of the vestibulocochlear cranial nerve. The transmission of nerve input and output signals from the cerebellum occur through bundles of nerve fibers called cerebral peduncles. These nerve bundles run through the midbrain connecting the forebrain and hindbrain.

Structure and Functions of Cerebellum

The cerebellum is located at the back of the brain, immediately inferior to the occipital and temporal lobes, and within the posterior cranial fossa. It is separated from these lobes by the tentorium cerebelli, a tough layer of dura mater. It lies at the same level of and posterior to the pons, from which it is separated by the fourth ventricle. It consists of a tightly folded layer of cortex, with white matter underneath and a fluid-filled ventricle at the base. Four deep cerebellar nuclei are embedded in the white matter. Each part of the cortex consists of the same small set of neuronal elements, laid out in a highly stereotyped geometry. At an intermediate level, the cerebellum and its auxiliary structures can be separated into several hundred or thousand independently functioning modules called “microzones” or “microcompartments”. Like other structures in the central nervous system, the cerebellum consists of grey matter and white matter:

There are three ways that the cerebellum can be subdivided – anatomical lobes, zones and functional divisions.

The cerebellum receives information from the sensory systems, the spinal cord, and other parts of the brain and then regulates motor movements. The cerebellum coordinates voluntary movements such as posture, balance, coordination, and speech, resulting in smooth and balanced muscular activity. It is also important for learning motor behaviors. It is a relatively small portion of the brain — about ten percent of the total weight, but it contains roughly half of the brain’s neurons, specialized cells that transmit information via electrical signals.

The cerebellum is involved in several functions including:

The cerebellum processes information from the brain and peripheral nervous system for balance and body control. Activities such as walking, hitting a ball, and playing a video game all involve the cerebellum. The cerebellum helps us to have fine motor control, while inhibiting involuntary movement.