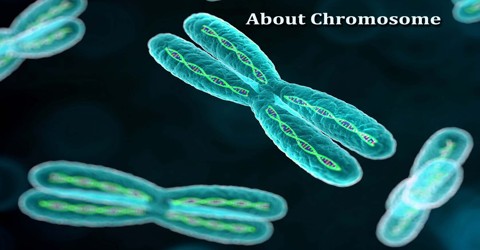 Chromosome is a single chain of DNA that is coiled and super coiled to form dense thread-like pieces. The term chromosome is derived from the Greek words “chroma” or color and “some” or body and is so named because chromosomes have the ability to be stained with dyes. The chromosomal DNA contains an average of 150 million nucleotide building blocks, called bases. DNA molecules are among the largest molecules now known. DNA is the genetic instruction book for enabling the production of proteins and cell processes that are essential to life and inherited from generation to generation. Every piece of DNA is composed of gene sequences containing instructions for each cell’s development, reproduction and ultimately death. Each of the DNA chains within chromosomes may contain anywhere between 10,000 to 1,000,000,000 nucleotides.

Among many organisms that have separate sexes, there are two basic types of chromosomes: sex chromosomes and autosomes. Autosomes control the inheritance of all the characteristics except the sex-linked ones, which are controlled by the sex chromosomes. There are 22 pairs of autosomes and 1 pair of allosomes in our genome and thus in our cells, resulting in a total of 46 chromosomes. The autosome pairs are labeled 1-22 depending on their sizes in base pairs, while the allosomes are labeled by letters X and Y. Male and female bodies contain the same 22 pairs of autosomes. Chromosome breakage is the physical breakage of subunits of a chromosome. It is usually followed by reunion, frequently at a foreign site, resulting in a chromosome unlike the original. Breakage and reunion of homologous chromosomes during meiosis are the basis for the classical model of crossing over, which results in unexpected types of offspring of a mating.

Structure and Functions of Chromosomes Somatic cells reproduce by dividing, a process called mitosis. Between cell divisions the chromosomes exist in an uncoiled state, producing a diffuse mass of genetic material known as chromatin. The uncoiling of chromosomes enables DNA synthesis to begin. During this phase, DNA duplicates itself in preparation for cell division.

Functions of Chromosomes are:

Genetic Code Storage: Chromosome contains the genetic material that is required by the organism to develop and grow. DNA molecules are made of chain of units called genes. Genes are those sections of the DNA which code for specific proteins required by the cell for its proper functioning.

Control of Cell Division: Chromosomes check successful division of cells during the process of mitosis. The chromosomes of the parent cells insure that the correct information is passed on to the daughter cells required by the cell to grow and develop correctly.

Formation of Proteins and Storage: Proteins are essential for the activity of a cell. The chromosomes direct the sequences of proteins formed in our body and also maintain the order of DNA. The proteins are also stored in the coiled structure of the chromosomes. These proteins bound to the DNA help in proper packaging of the DNA.