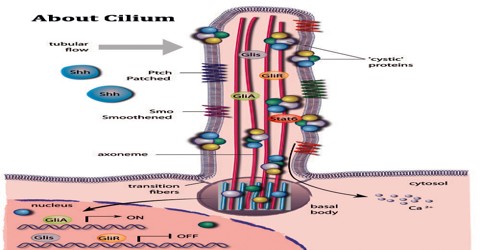 Cilium (plural cilia) is any of the short thread-like projections on the surface of a cell, organism, etc, whose rhythmic beating cause’s movement of the organism or of the surrounding fluid. Cilia are little appendages that stick out from eukaryotic cells. They whip back and forth and help cells move around in cellular fluids. They also help particles move past the cell. It may be fused in short transverse rows to form membranelles or in tufts to form cirri. Capable of beating in unison, cilia move mammalian ova through oviducts, generate water currents to carry food and oxygen past the gills of clams, carry food through the digestive systems of snails, circulate cerebrospinal fluid of animals, and clean debris from the respiratory systems of mammals. In modified form, cilia trigger the discharge of stinging devices in jellyfish and give rise to the light-sensitive rods of the mammalian retina and the odour-detecting units of olfactory neurons.

Cilium (Cilia), like a flagellum, is composed of a central core (the axoneme), which contains two central microtubules that are surrounded by an outer ring of nine pairs of microtubules. The outer ring of microtubules is surrounded by a membrane that is continuous with the cell membrane; ciliary outgrowth is controlled by the basal body that is located just inside the cell surface at the base of the cilium. Beneath the surface of some cells there is a network of fibrous rootlets or microtubular bundles that may provide support for the epithelium or coordinate ciliary beating.

The term ‘cilia’ (Cilium) refers to a group of these appendages, whereas only one or two of them would be called flagella. Cilia are present on almost all of the cells in our body.

Cilia (Cilium) can be grouped into two categories. First, there are motile cilia, which are always moving in a single direction. They help the cell move around in the cellular fluids and help move fluids past the cell. Motile cilia are found together on cells and coordinate their movements to be most effective, making up for their small size.

The second type of cilia is non-motile cilia, and these are responsible for sensing the surrounding environment. They are also called primary cilia. Whereas motile cilia are found in groups on cells, each cell usually has just one non-motile cilium.

Structure and Function of Cilia (Cilium)

Cilia (Cilium) are broadly divided into two types. They function separately and sometimes together:

‘Motile’ (or moving) cilia are found in the lungs, respiratory tract and middle ear. These cilia have a rhythmic waving or beating motion. They work, for instance, to keep the airways clear of mucus and dirt, allowing us to breathe easily and without irritation. They also help propel sperm.

‘Non-motile or ‘primary’ cilia were long thought to be evolutionary vestigial organs. They are now recognised as playing crucial roles in a number of organs. Some act as a sensory antenna for the cell, receiving signals from other cells or fluids nearby.

In the kidney, for example, cilia bend with urine flow and send a signal to alert the cells that there is a flow of urine.

In the eye, non-motile cilia are found inside the light-sensitive cells (photoreceptors) of the retina. These cilia act like microscopic train-tracks, and allow the transport of vital molecules from one end of the photoreceptor to the other. Ciliary proteins are synthesized in the cell body and must be transported to the tip of the axoneme. This is achieved by Intraflagellar Transport (IFT), an ordered and highly regulated anterograde and retrograde translocation of polypeptide complexes (IFT particles) along the length of the ciliary axoneme. Cilium (Cilia) defects can lead to a number of human diseases. Genetic mutations compromising the proper functioning of cilia, ciliopathies can cause chronic disorders such as primary ciliary dyskinesia (PCD), nephronophthisis or Senior-Loken syndrome. In addition, a defect of the primary cilium in the renal tube cells can lead to polycystic kidney disease (PKD). In another genetic disorder called Bardet-Biedl syndrome (BBS), the mutant gene products are the components in the basal body and cilia.