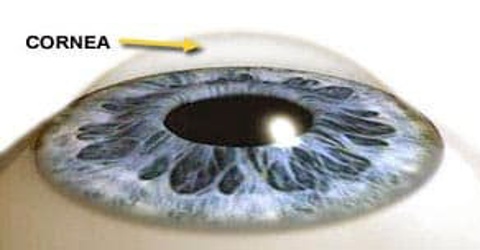 Cornea is the clear, dome­shaped surface that covers the front of the eye and it is the eye’s outermost layer. It lies directly in front of the iris and pupil, and it allows light to enter the eye. The cornea is more than a protective film; it is a fairly complex structure that has five layers. The cornea’s main function is to refract, or bend, light. The cornea is responsible for focusing most of the light that enters the eye. In humans, the refractive power of the cornea is approximately 43 dioptres. While the cornea contributes most of the eye’s focusing power, its focus is fixed. The curvature of the lens, on the other hand, can be adjusted to “tune” the focus depending upon the object’s distance. Medical terms related to the cornea often start with the prefix “kerat-” from the Greek word κέρας, horn.

Structure and Functions of Cornea

Cornea is composed of proteins and cells. It does not contain blood vessels, unlike most of the tissues in the human body. Blood vessels may cloud the cornea, which may prevent it from refracting light properly and may adversely affect vision. The horizontal diameter of the cornea typically measures about 12 millimeters (mm), and the vertical diameter is 11 mm, when viewed from the front. But if viewed from behind, the cornea appears circular, with a uniform diameter of approximately 11.7 mm. This makes the cornea about two-thirds the size of a dime. The center thickness of the average cornea is about 550 microns, or slightly more than half a millimeter. The cornea tends to repair itself quickly from minor abrasions. However, deeper abrasions may cause scars to form on the cornea, which causes the cornea to lose its transparency, leading to visual impairment. The clear cornea allows light to enter the eye for vision. But it has another very important function as well the cornea provides approximately 65 to 75 percent of the focusing power of the eye.