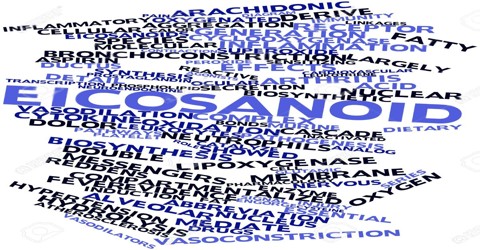 Eicosanoids are any of a group of compounds, including the leukotrienes and the prostglandins, which are produced by the oxygenation of essential fatty acids and which are involved in a range of physiological processes, including inflammation and immunity.

Eicosanoids work like hormones, but they do not like to travel. Eicosanoids go by the nickname ‘local hormones’ because they act on cells close to their site of production. Eicosanoids also rapidly break down, so they are not able to travel very far. There are different types of eicosanoids, but the three most researched types are prostaglandins, thromboxanes, and leukotrienes. We will explore the functions of each of these in a moment, but first, let’s learn a few general facts about eicosanoids and the effects they have on our body. Eicosanoids function in diverse physiological and pathological systems including those: mounting or inhibiting inflammation, allergy, fever and other immune responses; influencing the abortion of pregnancy and normal childbirth; contributing to the perception of pain; regulating cell growth; controlling blood pressure; and modulating the regional flow of blood to tissues.

Eicosanoids typically are not stored within cells but rather synthesized as required. They derive from the fatty acids that make up the cell membrane and nuclear membrane. These fatty acids must be released from their membrane sites and then metabolized initially to products which most often are further metabolized through various pathways to make the large array of products we recognize as bioactive eicosanoids.

However, several other classes can technically be termed eicosanoid, including the hepoxilins, resolvins, isofurans, isoprostanes, lipoxins, epi-lipoxins, epoxyeicosatrienoic acids (EETs) and endocannabinoids. LTs and prostanoids are sometimes termed ‘classic eicosanoids’ in contrast to the ‘novel’, ‘eicosanoid-like’ or ‘nonclassic eicosanoids’.

Types and Functions of Eicosanoids

There are three types of eicosanoids, like as Prostaglandins, Thromboxanes  and Leukotrienes. Thromboxanes are another type of eicosanoids, but it might be more correct to think of them as modified prostaglandins due to their structure. When thromboxanes are produced, they constrict blood vessels and cause platelets to aggregate. When we cut ourself, the body controls bleeding by constricting blood vessels and gathering platelets to plug up the leak. It will be easy to recall what thromboxanes do if we link them to the term we use to describe the formation of a blood clot, which is thrombosis. So, thromboxanes help out with thrombosis.

Leukotrienes, the three cysteinyl leukotrienes, LTC4, LTD4, and LTE4, are potent bronchoconstrictors, increasers of vascular permeability in postcapillary venules, and stimulators of mucus secretion that are released from the lung tissue of asthmatic subjects exposed to specific allergens. They play a pathophysiological role in diverse types of immediate hypersensitivity reactions. Drugs that block their activation of the CYSLTR1 receptor viz., montelukast, zafirlukast, and pranlukast, are used clinically as maintenance treatment for allergen-induced asthma and rhinitis; nonsteroidal anti-inflammatory drug-induced asthma and rhinitis; exercise- and cold-air induced asthma; and childhood sleep apnea due to adenotonsillar hypertrophy. When combined with antihistamine drug therapy, they also appear useful for treating urticarial diseases such as hives. The eicosanoids derived from these fatty acids have a variety of effects on our body. For example, they play a role in inflammation, fever promotion, blood pressure regulation, and blood clotting. They also influence the immune response and certain respiratory and reproductive processes. As we can see, this is a long and varied list. But, if we look closely at the list, we notice that eicosanoids bring about many of the unpleasant things that drive us to the doctor’s office, like fever and painful inflammation. These symptoms are why eicosanoids are such a focus of medical research.

In fact, there is a common class of drugs that inhibit the formation of different types of eicosanoids. We would go as far as to guess that we likely have some of these drugs in our bathroom medicine cabinet.