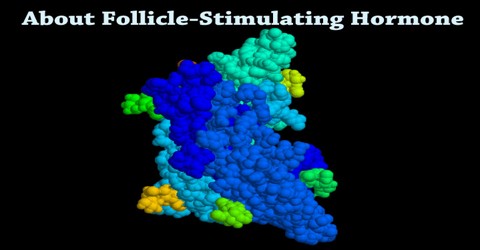 Follicle-stimulating hormone (or FSH) is an important part of the reproductive system. It’s responsible for the growth of ovarian follicles. Follicles produce estrogen and progesterone in the ovaries and help maintain the menstrual cycles in women. In men, FSH is a part of the development of the gonads as well as sperm production. FSH is synthesized and secreted by the gonadotropic cells of the anterior pituitary gland, and regulates the development, growth, pubertal maturation, and reproductive processes of the body. FSH and luteinizing hormone (LH) work together in the reproductive system.

Follicle-stimulating hormone or FSH is used commonly in infertility therapy, mainly for ovarian hyperstimulation as part of IVF. In some cases, it is used for reversal of anovulation as well.

It is available mixed with LH activity in various menotropins including more purified forms of urinary gonadotropins such as Menopur, as well as without LH activity as recombinant FSH (Gonapure, Gonal F, Follistim, Follitropin alpha). Follicle-stimulating hormone (FSH) is central to reproduction in mammals. It acts through a G-protein-coupled receptor on the surface of target cells to stimulate testicular and ovarian functions. We present here the 2.9-Å-resolution structure of a partially deglycosylated complex of human FSH bound to the extracellular hormone-binding domain of its receptor (FSHRHB).

FSH is a 35.5 kDa glycoprotein heterodimer, consisting of two polypeptide units, alpha and beta. Its structure is similar to those of luteinizing hormone (LH), thyroid-stimulating hormone (TSH), and human chorionic gonadotropin (hCG). The alpha subunits of the glycoproteins LH, FSH, TSH, and hCG are identical and consist of about 96 amino acids, while the beta subunits vary. Both subunits are required for biological activity.

FSH first binds to the high-affinity hormone-binding subdomain of FSHR and reshapes the ligand conformation to form a sTyr-binding pocket. FSHR then inserts its sTyr (i.e., sulfated Tyr335) into the FSH nascent pocket, eventually leading to receptor activation. The Purpose of the Follicle-stimulating hormone (FSH) Level Test

An FSH test is a simple blood test.

In men, an FSH test may be done to:

In women, the most common reasons for an FSH test include: There is very little risk of complications from having blood drawn from a vein.