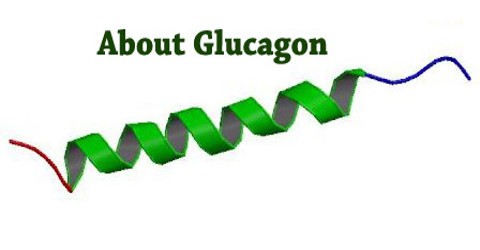 Glucagon is a hormone that helps the liver release glucose in order to raise blood-sugar levels. Like insulin, it must be administered via injection into the skin. It is also used as a medication to treat a number of health conditions. It is generally used when a person with T1D is unable to swallow liquid or food because of symptoms of hypoglycemia, including severe drowsiness, unconsciousness or seizures.

Glucagon plays an active role in allowing the body to regulate the utilisation of glucose and fats. It is released in response to low blood glucose levels and to events whereby the body needs additional glucose, such as in response to vigorous exercise. When glucagon is released it can perform the following tasks:

Glucagon is a peptide or protein hormone, that is produced by the pancreas. The pancreas is an accessory organ of the gastrointestinal system that produces multiple hormones and enzymes, including bicarbonate and insulin. Glucagon is produced whenever the body needs more sugar for energy production, which is done through cellular respiration. Typically, glucagon is released during fight or flight responses, as it help with the release of glucose from liver.

Glucagon is a 29-amino acid polypeptide. Its primary structure in humans is: NH2-His-Ser-Gln-Gly-Thr-Phe-Thr-Ser-Asp-Tyr-Ser-Lys-Tyr-Leu-Asp-Ser-Arg-Arg-Ala-Gln-Asp-Phe-Val-Gln-Trp-Leu-Met-Asn-Thr-COOH.

Glucagon is generated from the cleavage of proglucagon by proprotein convertase 2 in pancreatic islet α cells. In intestinal L cells, proglucagon is cleaved to the alternate products glicentin, GLP-1 (an incretin), IP-2, and GLP-2 (promotes intestinal growth). The polypeptide has a molecular weight of 3485 daltons. Glucagon is a peptide (nonsteroid) hormone.

Glucagon Use in Diabetes

In people with diabetes, glucagon’s presence can raise blood glucose levels too high. The reason for this is either because not enough insulin is present or, as is the case in type 2 diabetes, the body is less able to respond to insulin. In type 1 diabetes, high levels of circulating insulin can inhibit the release of glucagon in response to hypoglycemia.

Glucagon can be administered by injection in response to severe episodes of hypoglycemia. Glucagon is useful for people treating their diabetes with insulin.

Function and Mechanism of Glucagon

Glucose is stored in the liver in the form of the polysaccharide glycogen, which is a glucan a polymer made up of glucose molecules. Liver cells (hepatocytes) have glucagon receptors. When glucagon binds to the glucagon receptors, the liver cells convert the glycogen into individual glucose molecules and release them into the bloodstream, in a process known as glycogenolysis. As these stores become depleted, glucagon then encourages the liver and kidney to synthesize additional glucose by gluconeogenesis. Glucagon turns off glycolysis in the liver, causing glycolytic intermediates to be shuttled to gluconeogenesis. Glucagon binds to the glucagon receptor, a G protein-coupled receptor, located in the plasma membrane. The conformation change in the receptor activates G proteins, a heterotrimeric protein with α, β, and γ subunits. When the G protein interacts with the receptor, it undergoes a conformational change that results in the replacement of the GDP molecule that was bound to the α subunit with a GTP molecule. This substitution results in the releasing of the α subunit from the β and γ subunits. The alpha subunit specifically activates the next enzyme in the cascade, adenylate cyclase.

Side Effects of Glucagon

Nausea and vomiting may occur occasionally after injection of glucagon, but this may be a symptom of the hypoglycemia for which glucagon is being given. Rare allergic-type reactions may occur with glucagon including itching, respiratory distress, or low blood pressure. Glucagon should not be administered to hypoglycemic patients who are also experiencing starvation, adrenal insufficiency or are suffering from chronic hypoglycemia. These medical conditions may be associated with an inability of the liver to produce glucose sufficiently in response to glucagon. For these patients, oral glucose is more effective if the patient is conscious. If the patient is not conscious, intravenous glucose should be given.

All patients with diabetes should have a glucagon emergency kit available. Friends and relatives of a diabetic patient should know the symptoms of hypoglycemia and be instructed how to administer glucagon if necessary.