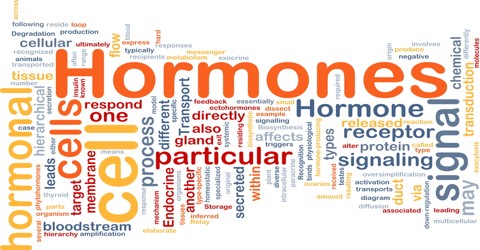 Hormones are chemical substances secreted from endocrine glands directly into the blood. A hormone is a specific molecule that acts as a chemical messenger in the endocrine system. Most hormones are carried by the circulatory system to different areas of the body, where they influence specific cells and organs. Hormones regulate various biological activities including growth; development; reproduction; energy use and storage; and water and electrolyte balance. Hormones are used to communicate between organs and tissues for physiological regulation and behavioral activities, such as digestion, metabolism, respiration, tissue function, sensory perception, sleep, excretion, lactation, stress, growth and development, movement, reproduction, and mood. Hormones affect distant cells by binding to specific receptor proteins in the target cell resulting in a change in cell function.

Many hormones are secreted by special glands, such as thyroid hormone produced by the thyroid gland. Hormones are essential for every activity of life, including the processes of digestion, metabolism, growth, reproduction, and mood control. Many hormones, such as neurotransmitters, are active in more than one physical process.

Hormones have the following effects on the body: A hormone may also regulate the production and release of other hormones. Hormone signals control the internal environment of the body through homeostasis. Hormone production and release are primarily controlled by negative feedback. In negative feedback systems, a stimulus elicits the release of a substance; once the substance reaches a certain level, it sends a signal that stops further release of the substance. In this way, the concentration of hormones in blood is maintained within a narrow range. There are three mechanisms by which endocrine glands are stimulated to synthesize and release hormones: humoral stimuli, hormonal stimuli, and neural stimuli.

Hormone secretion can be stimulated and inhibited by:

Hormones can be classified into two main types: peptide hormones and steroid hormones.