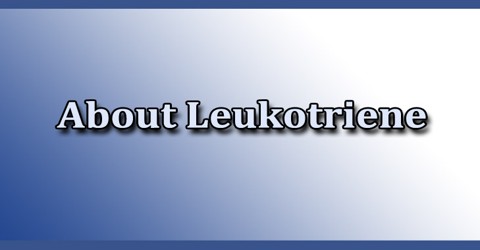 Leukotriene is any of a group of eicosanoids that are generated in basophils, mast cells, macrophages, and human lung tissue by lipoxygenase-catalyzed oxygenation especially of arachidonic acid and that participate in allergic responses, as bronchoconstriction in asthma. Leukotriene is important in inflammation and allergic reactions because of its ability to constrict blood vessels and attract various types of immune cells. Leukotrienes use lipid signaling to convey information to either the cell producing them (autocrine signaling) or neighboring cells (paracrine signaling) in order to regulate immune responses. Leukotriene production is usually accompanied by the production of histamine and prostaglandins, which also act as inflammatory mediators.

Leukotrienes have also been implicated in a variety of diseases including allergic rhinitis, asthma, and kwashiorkur, a type of protein deficiency caused by malnutrition. Lipoxins seem to have an anti-inflammatory function that opposes some of the effects of leukotrienes.

The leukotrienes, derived from the 5-lipoxygenase pathway, were first discovered in 1979. The name “leukotrienes” refers to the leukocyte origin of these molecules, and to the conjugated double bonds in their structure. The lipoxins were first discovered in 1984. They are derived from the 15-lipoxygenase pathway and have a fully conjugated tetraene structure.

Leukotrienes contribute to the pathophysiology of asthma, especially in patients with aspirin-exacerbated respiratory disease (AERD), and cause or potentiate the following symptoms: Function and Role of Leukotrienes

The five biologically active leukotrienes are: leukotriene (LT) A4, C4, D4, E4, and B4. The 5-lipoxygenase pathway ends with the production of LTA4. Two paths branching from LTA4 lead to the formation of the other leukotrienes. One path leads to LTB4, while the other leads to the manufacture of the cysteinyl, or peptido, leukotrienes, LTC4, LTD4, and LTE4, which all contain an amino acid moiety.

Some of leukotriene functions involve multiple leukotrienes. Specifically, LTB4 and LTC4 enhance the adherence of leukocytes to endothelial cells at sites of inflammation.The cysteinyl leukotrienes, LTC4, LTD4, and LTE4, cause increased vasopermeability by causing endothelial cells to contract. These leukotrienes have been identified as the slow-reacting substance of anaphylaxis and are among the principal mediators of asthma. LTB4 is one of the most potent chemotactic factors for neutrophils, and is more weakly chemotactic for eosinophils. LTB4 has also been implicated in the stimulation of mucous secretion in the bronchi, while LTC4 and LTD4 cause the smooth muscles of the bronchi to contract.

The binding of leukotrienes changes cell function, but the mechanisms are poorly understood. Leukotrienes have specific receptor sites on cell membranes of cells in the liver, corpus luteum, adrenal gland, uterus, pacreatic islets, platelets, and red blood cells. One possibility is that leukotrienes act by modulating the production of cyclic AMP by interacting with stimulatory and inhibitory subunits of the G-proteinadenylate cyclase. LTB4 – LTB4 is synthesized in vivo from LTA4 by the enzyme LTA4 hydrolase. Its primary function is to recruit neutrophils to areas of tissue damage, though it also helps promote the production of inflammatory cytokines by various immune cells. Drugs that block the actions of LTB4 have shown some efficacy in slowing the progression of neutrophil-mediated diseases.

LTG4 – There has also been postulated the existence of LTG4, a metabolite of LTE4 in which the cysteinyl moiety has been oxidized to an alpha-keto-acid (i.e.—the cysteine has been replaced by a pyruvate). Very little is known about this putative leukotriene.