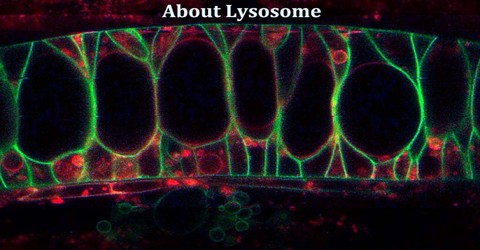 Lysosome is a cell organelle, which is surrounded by a membrane; it has an acidic interior, and contains hydrolytic enzymes that break down food molecules, especially proteins and other complex molecules. Lysosomes fuse with vacuoles to digest their contents. The digested material is then transported across the organelle’s membrane for use in or transport out of the cell. Lysosomes contain a wide variety of hydrolytic enzymes (acid hydrolases) that break down macromolecules such as nucleic acids, proteins, and polysaccharides. These enzymes are active only in the lysosome’s acidic interior; their acid-dependent activity protects the cell from self-degradation in case of lysosomal leakage or rupture, since the pH of the cell is neutral to slightly alkaline. Lysosomes were discovered by the Belgian cytologist Christian René de Duve in the 1950s. He was awarded a share of the 1974 Nobel Prize for Physiology or Medicine for his discovery of lysosomes and other organelles known as peroxisomes.

There are basically four types of lysosomes, they are: Structure and Functions of Lysosomes

Lysosomes are surrounded by a membrane composed of phospholipids that separate the inside of the lysosomes from the membrane’s external environment. Phospholipids are the same cellular molecules that make up the cell membrane surrounding the entire cell. Lysosomes range in size from 0.1 to 1.2 micrometers. Structurally, lysosomes are like a floating garbage bag that contains enzymes capable of digesting molecules. Their external membrane is like a gateway that allows molecules inside of the lysosome without allowing the digestive enzymes to escape into the cell.

The Golgi apparatus, also known as the Golgi complex, the Golgi body, or simply the Golgi, which is present in the vast majority of eukaryotic cells, forms tiny vesicles that separate, some descriptions say “bud”, from the ends of the Golgi cisternae. Vesicles formed in this way that contain enzymes such as proteases and lipases, are primary lysosomes. Secondary lysosomes are formed when primary lysosomes fuse with other membrane-bound vesicles.

The functions of lysosomes concern the different ways in which the enzymes contained within the membrane (that defines and encloses the lysosome) affect other materials, which can originate from either outside or inside the cell. Cellular Digestion: Lysosomal enzymes degrade proteins into dipeptides and carbohydrates onto monosaccharides.Sucrose and polysaccharides are not digested and remain in the   lysosomal vacuoles.

Autophagy: By the process of autophagy lysosomes constantly remove cellular components like mitochondria etc. Cytoplasmic organelles become surrounded by smooth endoplasmic reticulum and lysosomes attach with it and discharge their contents into autophagic vacuole and the organelle is digested. Autophagy isa general; property of eukaryotic cells.

Exocytosis: Contents of the primary lysosome mat be released int the medium by exocytosis and it occurs during replacement of cartilage by bone during development where osteoclasts release lysosomal enzymes.It can also occur in bone remodelling under influence of parathyroid hormone. Crinophagy refers to the process by which secretory granules produced in excess are removed by lysosomes.

Endocytosis: Lysosomes may fuse with vesicles or vacuoles formed by endocytosis and release their enzymes into it for digestion. The material for digestion may be food (protozoa)  or a foreign body like parasite. The products of digestion are absorbed and assimilated   leaving undigested which are released outside by exocytosis.

Role in Germ Cells and Fartilization: The acrosome in spermatozoa may be considered as a special lysosome containing protease and hyaluronidase along with acid phosphatase .The lysosome in Ova help in digestion of stored food

In general, the functions of lysosomes involve breaking-down i.e. processing to ‘make safe’ or make use of, or removing from the cell e.g. by exocytosis, useless and potentially harmful materials such as old worn-out parts of the cell or potential threats such bacteria. Lysosomes can therefore be thought of as the rubbish disposal units within cells.